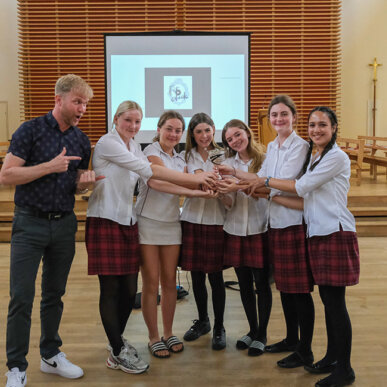 QM was joined this week by Adam Corbally - entrepreneur, motivational speaker, and star of BBC's The Apprentice.

Adam gave an inspiring talk to Year IV about his early life, his tenacious work ethic, and his hard-won success. He then introduced the girls to the enterprise challenge of the day, before each group set to work devising a business plan and delivering a presentation.

On Thursday, Year IV had an Enterprise Day run by Adam Corbally.

He started off the day by telling us all about his early life - how he left school at 16 with no qualifications and had to find a way to make money; this was hard as he needed the money quickly because his parents had kicked him out of the house.

During his young life, he was unfortunately sent to a juvenile detention centre before turning his life around. He got a stall at his local market and turned it into a fruit and veg supplier for many different schools, one of them being his old secondary school.

Years later, he had over 10 properties which he was renting; meaning he had the time to do something he loved, which was giving inspirational talks.

Now you might have heard of the name Adam Corbally if you watch Total Wipeout or The Apprentice as he was a finalist on both shows. Like many other contestants, he was fired from The Apprentice (!), and he came in an amazing second place on Total Wipeout.

At the end of the day, we all presented our ideas which included an eco-friendly food delivery service, a scented diffuser to help you sleep or calm down, an online school which would teach you how to pay mortgages, learn how to spend your money sensibly, and learn public speaking skills.

The three judges were Miss Roe, Mrs Nadin and Adam. They chose 1st, 2nd and 3rd place, and also the most creative group, the best team leader, and the best presenter.

Overall we learnt that it is never a bad thing asking for support and you can't expect things to happen - you have to put in the work and it sometimes isn't that much work.

Thank you very much for visiting QM, Adam, and we hope you can come again to inspire more students.