Extend your abilities beyond the classroom

This stand-alone qualification allows you to embark on largely self-directed projects and carries UCAS points, helping you to stand out to prospective universities. 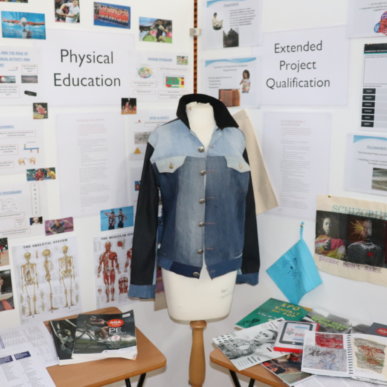 The EPQ carries UCAS points and is equivalent to 50% of an A-level. While all other reformed AS Levels are 40% of a full A-level and only go up to an A grade, the EPQ gives the potential to achieve an A*.

Key Stage 5 students can devise the topic of their qualification. This might have developed from an area of study, topical current affair, or from a personal interest or hobby. The key to success is the ability to work autonomously and adapt a self-disciplined and independent approach to learning.

In the 2021-2022 academic year, three of our Sixth Formers undertook the EPQ. They each chose fascinating topics that wouldn't otherwise have been available to them under the current A Level syllabus.

Emily (former Head Girl) focussed on the failure of justice when sexual history is used as evidence in rape trials.

"My EPQ explored how juries and sexual history evidence pervert the cause of justice in rape trials. With just 1.5% of reported rapes leading to a charge, the United Kingdom’s criminal justice system fails.

"Sexual history used as evidence is not only irrelevant, but undermines Article 6 of the ECHR, creates jury bias, credits rape mythology and encourages victim blaming."

I presented my research and proposed reforms as a TED Talk (alongside the required research report), completing my EPQ as an ‘artefact’. Here is a short essay on my findings, which acted as the basis of the talk."

"I researched the impact of the French Resistance on gender relations in France during the 1940s. During the process, I looked into the roles which women undertook in the Resistance whilst the majority of the men were fighting, and whether this had a positive or a negative impact on gender equality.

After completing lots of research, I came to the conclusion that although gender relations improved to a degree during the Resistance itself, as women gained newfound freedoms in undercover work, the opposite was true when men returned from war. Focus then shifted in the latter half of the 1940s to reintegrating men into society, and women were blamed for France's defeat.

Overall, I found completing an EPQ a thoroughly interesting and enjoyable process and would recommend it to anybody completing one!"

"I was interested in the increased use of technology in American presidential campaigns, and the influence it can have on people's voting behaviour. This led me to research the impact of TV debates, researching the power of the visual image.

Also, I investigated the extent to which social media and tech firm Cambridge Analytica had an impact upon Trump's 2016 campaign.

It highlighted the uses of psychological and persuasive techniques used throughout political campaigns, and consequently the ways that this impacts the outcome of the election."

The hardest part was deciding what I wanted to focus on for my EPQ - once that was done I really enjoyed researching, developing and fine tuning my project.

Meet our dedicated team, receive a tour of the impressive facilities, and discover all that QM has to offer with a personal introduction to QM.
Book a Visit