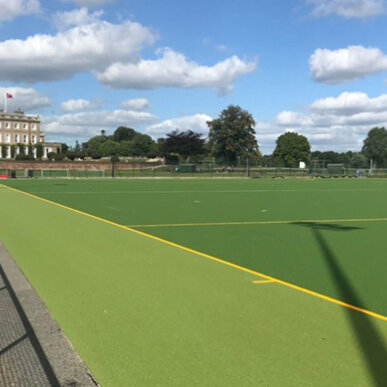 This week, read about a weekend of lacrosse fixtures against Harrogate Ladies’ College, the latest game for Mavericks B, and a close match for the Hockey 1sts vs Giggleswick School.

Player of the Match: India (I)

The girls went in positive to their Lacrosse on Saturday. With this being the first Lacrosse match for most of the team, they worked really hard and some fantastic movement in the midfield allowed for some great chances.

This led to a lovely goal from Grace, and a second goal from Matilda who received a great pass from Sadie. Well done to Greta who saved countless goals and worked hard the entire game.

Player of the Match: Flo

We travelled to HLC on Saturday for what was a day filled with support, enthusiasm and lacrosse. The matches started with the U13 and U15 teams who played extremely well with good play at both the attacking and defending sides.

Encouragement was loudly given by the Sixth Form who watched from the sidelines as they prepared for their matches. The U18 team played a match that they should all be proud of as they worked like a well-oiled machine, scoring goals consecutively and attempting new set plays. The defence stood their ground against what was a challenging attacking team and they achieved their aims and always had a smile on their face.

Player of the Match: Issy B

The U15s, made up of Year IVs and IIIs, had a closely fought and physical game against HLC U15s.

The first half saw it being neck and neck with some fantastic skill being shown. QM kept their dialling and showed some fantastic defence and attack skills.

The second half started the same with both teams showing how much they wanted it. HLC midfield just showed themselves even more in the second half, meaning they got a couple of quick goals putting them ahead. QM started to make a comeback but it was not to be. A loss, but a great fought game and some fantastic lacrosse played.

Player of the Match: Issy B

Mavericks B put in a good effort in the first two quarters, but then Stamford upped their game a gear, finding the net more often. The Bs demonstrated some good play up and down the court, especially from the defending third to the shooting circle. Unfortunately, their chances were not converted. Only one more game in this half of the season... bring it on!

Player of the Match: Daisy and Harriet

The 1sts played fantastically on Wednesday. Some great attacking allowed for a short corner to be won in the first half. Bonnie injected the ball strong out to Elsa at the top who then slipped it right to Jen. Jen then passed it back to Elsa on the penalty spot and Elsa finished it into the bottom left corner.

The second goal came in the second half with a 1-on-1 of Elsa against the keeper. She remained calm and slipped it past her, putting Queen Margaret's in the lead.

Unfortunately, Giggleswick continued to fight back, and despite Harriet making some great clears, they managed to get two goals in.

Onto the last few matches before Christmas for the team.