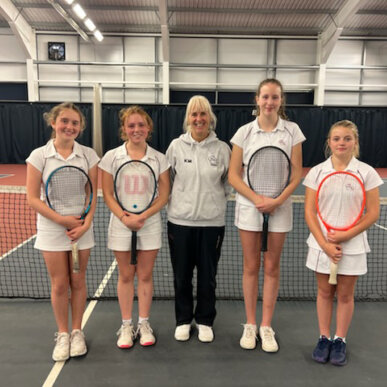 This week, Eve has a horseriding update, the QM Year III tennis team made a trip to Glasgow for some indoor competition, Mavericks played their first game after half term, and we have the latest hockey reports.

During the half term holiday, Eve and her horse Frosty have been busy competing. They took part in dressage at the British Riding Clubs area competition and came in 2nd.

They also competed in eventing where they came 4th.

Well done Eve and Frosty! Great to see you keeping active with your riding.

A trip up to Glasgow for our now U14 tennis team meant we were on the road early from school to reach Newlands Indoor Tennis Centre for a 12.30 pm start.

The team of Francesca B (III), Celia S (III), Isabel B (III) and Poppy R (III) had practised hard over the half term holiday in preparation for the event. It was the first time for some to play inside, with perfect conditions and no rain, wind or sun to compete against.

Glasgow had a player who was number one in the West of Scotland and certainly had played many tennis matches - certainly an outstanding player. All girls played singles and doubles and, as the matches were played, our players kept their heads high and showed true fighting spirit and talent against strong opposition.

They lost 6-0 but made lots of chances and played some excellent strokes, getting better and better as the day progressed. The games were very close the overall experience and challenge of the tournament did mean they had done so well being in the last 32 in Great Britain.

A huge thank you to our travelling supporters and to Mr Oliver for helping us drive there and back. Well played all.

Mavericks A vs Haxby 5

After a few shaky minutes, Mavericks A managed to pull themselves together and score on their centres as well as turning over Haxby ones.

A Mavs injury in the 3rd quarter meant a slight reshuffle of positions, though that didn't deter them from winning the match convincingly.

Mavericks B vs RI Blizzard

Despite having just 7 players, Mavericks B put on a decent performance and was only down 6-13 after halftime.

With the majority of the team playing out of position, they demonstrated great resilience and teamwork.

U14 Netball York & District Round National Schools (Away - Joseph Rowntree)

U18 Hockey County Round (Home)

Mavericks A Netball v Easingwold (Away)