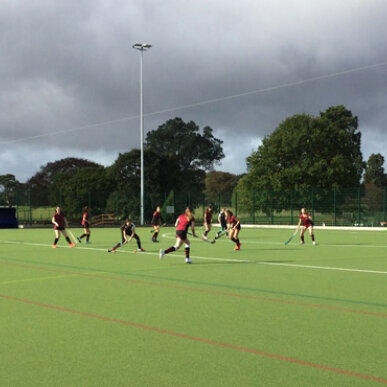 This week Mavericks B were put to the test and our Senior Hockey teams have been in action. We are delighted to introduce our new Tennis Coach, Jamie Costa! Mr Costa will work alongside Mrs Mitchell - welcome to QM!

The U16 Netball tournament on Tuesday was postponed half way through due to the torrential rain (the courts became unplayable). The reminder of this tournament will be played on Tuesday at Joseph Rowntree School (16:00 start). The girls had an unlucky loss to St Peter's in their first game, but they drew their 2nd and 3rd games, so the pool stage is still all to play for.

Mavericks B vs Northern Devils

For our first game away we put up a strong fight. In the first half we didn't get off to the best of starts, which put us on the back foot. However we fought hard and we managed to slow down the game and limit the number of goals the opposition scored. In the last quarter they only scored 12 to our 6, closing the gap in the final score.

The 2nds were given a last minute fixture on Wednesday against Ampleforth. The girls dominated possession and managed to use this to get a goal in the second half. Even with constant pressure from Ampleforth, the defence held strong and this allowed QM to finish with a 1-0 win. Harriet W (Year V) held the team together in the midfield and worked tirelessly to defend and to link through into the attack. Well done all.

The 1st XI Hockey Team came up against a very well organised team from RGS Newcastle on Wednesday afternoon. Having beaten Withington in the first round game this was always going to be a tough game of the Independent School Hockey Cup competition. QM were a class act side with some fabulous shots that would even make Maddie Hinch (GB Goal Keeper) work, this justifies Kitty E (LVI) being awarded Player of the Match by RGS. Our girls never gave up and they must be commended on their effort right to the final whistle. A special mention to Daisy L (LVI) who worked tirelessly throughout the match - her work rate also made an impression on the RGS coach. Well done girls - although this was an extremely tough game you need to keep your heads held high and go into your County T4 Hockey finals on Wednesday with confidence.

On Thursday the U16 Hockey Team played in their T3 County finals. Sadly they did not progress to the semi finals. The Year IV girls - Hattie, Edie and Lucy - stepped up to the mark and played some fabulous Hockey in both defence and midfield roles. It was down to the wire against Stokesley but they were able to find the back of net to take the win. Hattie E (Year IV) deserved the Player of the Match title with her tireless work in midfield. It was then a must win game v Queen Mary's - but sadly the girls were unable to hold the attack and went down 1-0 at half time. With a win at all costs, a new formation of an attacking structure was introduced but sadly a quick decision by Queen Mary's caught QM napping and we were unable to cope with the pressure. A nicely worked goal from the opposition to finish with a deflection into the corner.

Team of the Week: Mavericks A (for their recent match against Sherburn)

U14 Netball York & District Round National Schools (Away - Joseph Rowntree)

U18 Hockey County Round (Home)

Mavericks A Netball v Easingwold (Away)