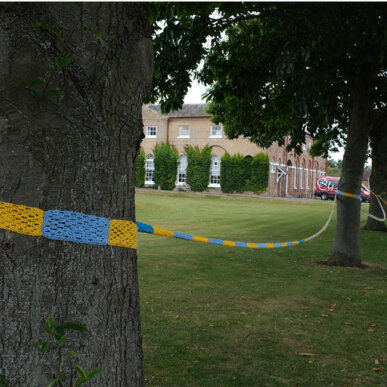 Staff and students have shown support to Ukraine this year in a number of ways, both in terms of fundraising and symbolic gestures.

One of these gestures was born from an idea by Mrs Baillie, as she spoke to students and staff during an assembly. The initial idea was to simply learn a new skill (crochet in this case), before considering that this could be put to good use by donating the final product to the people of Ukraine.

The QM community answered. In their rooms, at home, and during lunchtime sessions, staff and students started to create squares of blue and yellow, reflecting on the events in Ukraine showing their support for the people, plus the added benefit of it being a mindful activity.

The result has been the creation of a huge number of crochet squares, as you can see below. It's a real sign of how Ukraine has remained in the mind of all at QM during the past few months.

Over the summer Mrs Stewart will stitch them together into the size of baby blankets, and they will then be donated to show support and thought for the country.