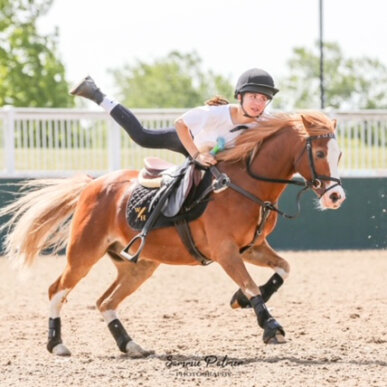 Read the latest sporting news from Queen Margaret's. This week, read about our rounders matches over the weekend vs Scarborough, plus a riding update from Polly in Year III.

ROUNDERS: U13 vs Scarborough

The U13 started off well against Scarborough in batting, gaining some excellent rounders and scoring a fantastic 13.

They worked hard in fielding to stop some of Scarborough's key players from getting full rounders and finished the game on a draw.

The fielding went from strength to strength, getting all of their players out in 19 balls! In batting, they did well to score 8.5 rounders with some excellent catches from the opposition winning the game overall 8.5 to 5!

ROUNDERS: U14 vs Scarborough

The U14s played with grit and determination, fielding particularly well and preventing many rounders.

Scarborough had some very nice batters who really did hit some lovely balls, this required the U14 team to think tactically and respond quickly. An excellent team effort.

On the batting front, the girls were unlucky with their innings; a strong, spin-bowler caught them off guard and three of our class batters were out on the first ball. Many things to learn and take away from this game.

Most Improved: Grace (I), Harriet (I)

Team of Week: U13 rounders

She and her pair rode fantastically to make the semi-final, narrowly missing out on a place in the final.