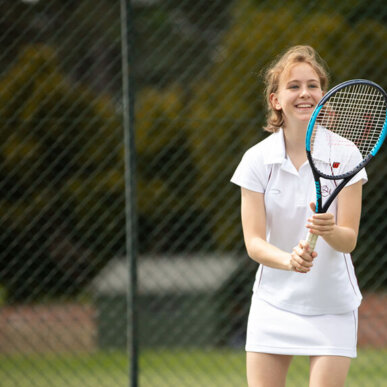 Read the latest sporting news from Queen Margaret's. This week: fantastic playing in the U13 Hockey Tournament, the final game of the season for Mavericks B vs Northern Devils, a challenging day for 1st Tennis, 1st Hockey vs University of Leeds, and the U15 Netball Area Tournament.

The girls were super excited for this tournament, with this being their first set of 11-a-side matches.

They played super well in the first match against Bootham, quickly scoring one goal but taking a while longer for the next two after some scrappiness around the goal. A first win gave the girls lots of confidence to start off with.

In the second match, the girls started strong and managed to score early. Our defence had a relaxing time as we maintained most of the possession, leading to several short corners being won. This allowed Lola, Isabel R, Isabel B and Francesca to score.

Our final match was by far the most challenging. The opposition worked hard to prevent our goals, but eventually Amelie managed to get on in the net assisted by Isabel B.

All girls played exceptionally well and represented the school brilliantly.

NETBALL: Mavericks B vs Northern Devils

Players of the Match: Cora (LVI)

Mavericks B were disappointed to be taking part in their final game of the season. The girls started strong as they always do and worked hard, despite only having one substitution.

The team worked several successful interceptions and passes allowing for a large amount of possession, but unfortunately we couldn't get the goals, allowing Northern to create a large lead.

Well done to the girls this season and we will be sad to see a few key players go with Fatemah, Issy H, Sophie and Hattie all moving on.

Well done to the team this season and excited for the same fun next year!

TENNIS: 1st Away vs Woodhouse Grove

This is a knockout competition and was formerly called the Aberdare Cup. We had drawn Woodhouse Grove School, with a journey over to Apperley Bridge near Bradford.

Our first four singles players started their matches to play a best-of-three-sets match, with the weather being cloudy and calm. Unfortunately, during their second sets the girls had to work with the rain, which began quite light but turned into a downpour. However, all carried on and we were 4-0 up.

As we had to complete the match, we returned to the court to compete in the doubles, showing the high quality of our play and winning 6-0.

Many congratulations to the team for persevering in challenging conditions and well played.

HOCKEY: 1st vs Uni of leeds

Player of the Match: Grace (UVI)

The 1st XI had their final match of the season this week before most of them go off for study leave. This match was mainly for enjoyment, but it was one of the nicest performances they had this year.

The girls won many short corners and had lots of chances on goal which contributed to Ava getting a lovely goal and Grace also managing to sneak one in. They successfully managed to pass around Leeds in the midfield and had lots of space to cut through upfront, but unfortunately couldn't get the final touch on most of the big balls into the circle.

Well played to everybody and we will be so sad to see our UVI girls leave who have been such a fundamental part of our 1st XI this year.

Thank you girls for your fantastic commitment and leadership this year and we wish you all the best for the future!

The U15s played superbly in the tournament on Thursday evening. They quickly got into the game, and in the very short matches they scored some excellent goals.

Winning 3/5 matches, and with scores being very close in the other games, the players should be proud of themselves.

Unfortunately a last-minute goal in the Milthorpe game cost QM the chance to go through to the play-offs.

Team of the week: Mavericks B

NETBALL: U13 vs Bootham

Reserve date for U15 Netball Tournament

NETBALL: U14 vs Bootham