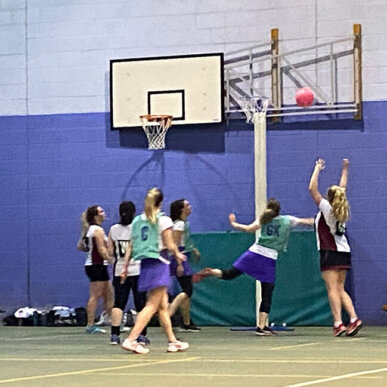 Read the latest sporting news from Queen Margaret's. This week: group Lacrosse fixtures vs Fettes College and Harrogate Ladies' College, Mavericks A & B matches, and more netball for the U12 & U17 teams.

Plus, calling all netball players: don't miss the chance to join half term Netball Youth Camps from England Netball! Read more below.

In extremely tough conditions, the girls put up a strong performance against both Fettes and HLC, demonstrating some outstanding play. Special mentions to Emily (UVI) and Charlotte (LVI) for stepping in at the last minute to be goalkeeper.

QM worked the ball hard around the circle, but poor weather conditions meant not all shots were as well-placed as they could have been. Player of the Match was awarded to Elsa (IV) for her beautiful play and demonstration of lacrosse. Nayama (LVI) was also given Player of the Match for linking well with Elsa to bring the ball down the pitch to goal.

LACROSSE: U15 Lacrosse vs Fettes College

The 2nds lacrosse team started well against Fettes taking the first goal. It was a well closed match with Players of the Match Rebecca (IV) and Jemima (LVI) working exceptionally hard on the pitch.

Unfortunately, we were not always able to convert to goal, and several key players of Fettes scored some fantastic goals. QM missed out on the win with the final score 5-8.

Despite the horrible weather on Saturday, the U14s were in good spirits and ready to give HLC and Fettes a run for their money.

The girls worked really well together. Some played in different positions than they were used to, and our defensive line up worked really hard to keep both teams out, with Charlotte (Year III) really stepping up and putting pressure on.

Imi (Year III) stepped into goal last minute and was a rock for the team, making some great saves. Unfortunately, it wasn't enough to keep the opposition at bay.

The girls were exhausted and freezing after putting in a great performance.

The U13 worked well as a team from the start against HLC, taking a goal very early on. All players worked solidly and were demonstrating some great lacrosse.

Player of the Match Isabel (II) scored some excellent goals, and Francesca (II) worked the ball well around the pitch. Overall, QM took the win 8-1 which was a fantastic game to finish the day off with!

Player of the Match: Sadie (Year I)

The U12s improved so much since their first lacrosse match a few weeks ago. Their passing and defending were so much better, which showed on the pitch.

Grace (Year I) dominated the centre of the field, and this lead to our two goals giving HLC a competitive match. The girls confidence has grown loads, which is reflected in their determination.

Keep up the good work girls!

NETBALL: U12 vs Bootham

The Mixed U12-U13 worked hard against Bootham, demonstrating some good interceptions. However, Bootham were the better team this time.

The girls have come away with ideas of what to work on in lessons, ready for the next match.

Well done to Camilla (II) who got the Player of the Match title.

NETBALL: Mavericks B vs Stamford Bridge

Mavs B were out to fight and put in a good performance this Tuesday. Our Year IVs really stepped up and worked hard, resulting in both being commended as Players of the Match.

The team worked well in one of the best performances we have had this season, and there was some lovely communication throughout the court.

Unfortunately, we just couldn't get the shots in, which allowed Stamford to sneak the lead. Quite a frustrating match with aggressive competition meant for a hard loss to take on , but on to the next one!

NETBALL: Mavericks A vs Haxby 4

Player of the Match: Bonnie (LVI)

Another great win for Mavericks this week, having previously lost to Haxby 4, they were determined after the first whistle.

All players linked well on court, making superb interceptions in both attack and defence. Player of the Match Bonnie had an exceptional game and wing defence, working tirelessly throughout, despite already playing a full game for the B team!

Final score of 43-20 was well deserved for all.

NETBALL: U17 vs Bootham

Player of the Match: Kitty (LVI)

With both UVI and Year V doing their mocks this week, it was the LVI chance to shine in the netball. With some girls having not played for over a year, it was great to see them back on the court.

It was a close game throughout, but QM had the lead every quarter. There were great interceptions from Coach's Players of the Match Nayama (LVI), Bonnie (LVI) and Charlotte (LVI), and some good shots from Player of the Match Kitty (LVI) - resulting in us holding the lead by one goal until the final whistle.

Team of the week: U13 Lacrosse

February Half Term is nearly here, and the England Netball Youth Camp (NYC) spaces are filling up quickly! NYCs are packed full of top-quality coaching, a range of match play opportunities, and tonnes of brand-new games, activities and team-building sessions - it’s the ultimate day for netball lovers!

There are two dates available in Yorkshire:

You can book your spot through England Netball Session Finder.