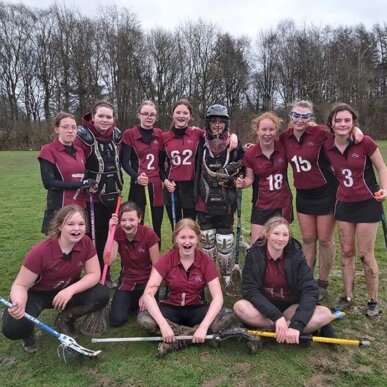 Read the latest sporting news from Queen Margaret's. This week: U15 Lacrosse North Schools Tournament, group netball fixtures vs Queen Mary's, games for Mavericks A and B teams, plus read a Winter Olympics review on GB v Switzerland Curling from Sophia and Rhiannon (Year II).

Last Saturday a squad of 12 players set off early for Moreton Hall. Our first two matches were against tough opposition (Moreton Hall and Bolton), but the players began to work well together in new combinations, and were committed and determined until the final whistle.

The next game was against Moreton Hall B. We started quickly with a couple of goals, and with the energy building and some excellent saves from our goalkeepers, we recorded a win.

Despite the cold wind and the rain, the team continued their positivity into our next two tough games, and we fought hard despite the results not going in our favour.

A huge thank you to Mrs Badger for accompanying the girls and to the parents for their enthusiastic support from the sidelines.

NETBALL: U12 vs Queen Mary's

Player of the Match: Heidi (Year I) and Grace (Year I)

After a competitive warm match against the U13B team, the U12 were ready and raring to go for their Queen Mary's match.

With the weather getting windier and windier, the game was getting more difficult. However, the girls all tried exceptionally hard, particularly Player of the Match Heidi (I) and Coach's Player Grace (I) who worked tirelessly in defence.

Queen Mary's took the overall win, but the girls have come away knowing what to work on for their next game.

NETBALL: U13 vs Queen Mary's

A close match for the U13 Netballers this weekend. Starting out slow, QM soon picked up the pace and put some pressure on Queen Mary's. This wasn't quite enough with Queen Mary's taking the win 17-14.

Well done to Players of the Match Fran and Blanca for their excellent performance.

It was a close game for the U15 Netballers against Queen Mary's this weekend, with some girls playing for QM Netball for the first time.

With only one goal in it at half time, it was all to play for. Unfortunately Queen Mary's took the overall win in the second half.

Special mentions go to the two U13 players Poppy (II) and Isabel (II) for playing up two age groups, with Poppy receiving the player of the match title! Coach's Player went to Ana (IV) for her superb defence!

NETBALL: U16 Netball vs Queen Mary's

A strong performance from the U16 Netballers against Queen Mary's. Swapping positions every quarter, the girls got to test their versatility and managed to take the overall win 23-17.

Player of the Match: Amelia (Year I) and Megan (Year II)

This internal match was a great way for all girls to warm up before their Queen Mary's fixtures.

The competitive spirit was evident, with the U12s wanting to show the U13s what they were made of. Both teams were working hard and possession was quite equally shared, with both teams fighting for goals.

The U13s snuck a lead for a bit, but just in the last few minutes, the U12s got a final goal to leave the score at a draw.

NETBALL: U14 vs Huntington

Nearly all of our Year IIIs were able to play in this match on Tuesday which was a great learning experience for all.

The A team began in the first half and put the pressure on Huntington with some great interceptions from Larissa (Year III) and a fantastic shot from Hannah (Year III). Huntington managed to get 5 goals in in this half, leaving QM 5-1 down.

In the second half, our B team took Huntington's B's by storm with fantastic defending by Charlotte (Year III) and great passing through the team allowing Niime (Year III) and Emilia (Year III) to get some lovely shots away, bringing the final score up to 6-6.

Well done to all who played!

With a lack of UVI this week, Mavericks A were unsure of who would make up their team, but with some outside help from friends we managed to get quite a successful squad together.

Alongside help from Nayama (LVI), Jen (Year V), Elsa (Year IV) and Megan (LVI), the experienced team put in a great performance, with calm and composed passing and solid defending allowing Jen and Miss Bale to do their thing, scoring goal after goal.

This put pressure on the Cannons giving rise to a large victory, although not without it's injuries with Miss Bale falling a total of 4 times and Megan leaving the match with an ankle injury.

Get well soon to both!

Player of the Match: Megan (LVI)

Mavericks B was ready to go on Tuesday evening. They got off to a fantastic start with the first quarter ending 8-4 to Firebirds.

Unfortunately things began to get harder from here as Firebirds put on great pressure and marked very well, stopping Mavs passes getting through. This tested our fitness and ability, and made it a challenging match which taught us a lot.

Team of the week: U16 Netball

"We started off badly, but ended up getting Switzerland stuck. They were clever though, and put their last stone in the middle, meaning Switzerland went up a goal. We only got to watch up to the 4th end, but it ended up 2-1 to GB, so quite intense.

Curling is a very different sport. Although it seems strange when you first watch, it actually takes a high amount of concentration. The team members slide a stone across the floor and clean the ice to move and curl it. The goal is to eventually end up with the stone in the middle of the bullseye and knock away your opponents.

Overall, you have to really watch the game to understand it. Whilst it can seem steady at times, it also has gripping moments!

We had a go at recreating the game in the lounge, but it wasn't quite the same!"