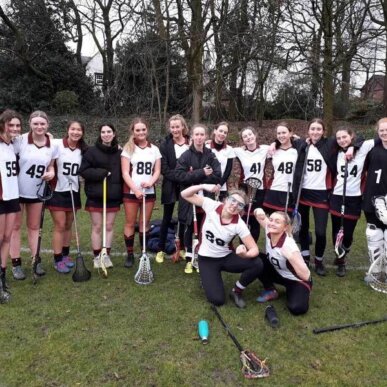 Well done to Megan (LVI) who qualified in her first eventing competition away from home in 2022.

"Last Sunday I competed at Valeview Equestrian Centre with my horse Harry. It was our first arena eventing competition away from home this year, and officially began our preparation for the 2022 eventing season!

We had a two-and-a-bit-hour journey over to the venue, where I got some A Level work done and relaxed before the competition. Once we arrived, we walked the course - which looked fabulous - then got myself and Harry ready.

Harry warmed up beautifully and then proved himself in the 1.05m class, showing that he remembered his favourite part of eventing - Cross Country.

The event was a qualifier for the British Eventing Arena Eventing Championships, and I can happily say we did qualify, going double-clear and into 2nd place, with only 0.05 seconds keeping us from 1st place.

The British Eventing Arena Eventing Championships will take place at Aston Le Walls in February half term this year.

I'm super excited to be spending my half term with my family, friends and horses, and even more excited to be going to my second national event with Harry."

The Senior Team had a tough first match against Bolton. It took them a while to get back into the game after having had quite a bit of time off the pitch. They all worked hard to play together and started to become a team at the end of the first game.

A little disheartened after the first game, but with some positive and inspirational words from Captain Caragh (UVI), plus some Jelly Babies from The Forbes, the girls gained the energy they needed to take on the next team.

The girls just got better and better. Some exceptional work in both defence and attack kept Bolton within reaching distance going into the last quarter. With two of our players switching ends in this game, we have definitely found that they are very versatile - Emily (UVI) showing us how to attack and Daphne (UVI) giving a fantastic debut performance in straight defence.

As one of the youngest members of the squad, Olivia (Year IV) managed to score and was voted Captain's Player of the Day. In the last quarter, QM was tired and Bolton was determined to get some more goals. Some fantastic saves by Megan (LVI) throughout the game meant Bolton had to work her very hard to get their goals in. A great second game overall. All the players deserve to be very proud of themselves, showing that playing as a team really does help, and that QM girls have great grit and determination that shows through right to the end of the game.

U13 Lacrosse vs Bolton

The U13s had a great match today with lots of learning involved. They worked well as a team to defend and assist Camilla (II), who had stepped up to play in goal. Unfortunately, her excellent saves were not enough to give QM a victory, but it helped keep her team going as they tried again and again to get a shot past Bolton's goalkeeper.

The girls fought hard to dodge Bolton and worked tirelessly back and forth. Overall, they should be very happy with their performance.

U12 Lacrosse vs Bolton

Player of the Match: Grace (Year I), Freya (Year II)

Supported by a few of the U13s, the U12s had tough competition today. With this being only their second lacrosse fixture, they were a bit unsure to start with but got up and running quickly to take on the Bolton side.

Their attacking was strong, with some lovely runs from Poppy and Grace which paid off with a few lovely goals. The team's defending was strong, if a bit hesitant, which allowed Bolton to sneak a few goals past Sophia (Year II)- another new goalkeeping talent who was a great addition in this position. Well done girls.

Player of the Match: Megan (LVI)

Mavericks B were glad to be inside for their match on Tuesday. The girls were raring to go and put in great effort throughout the game.

Unfortunately, the passing and interceptions were a bit sloppy for the team which allowed Selby to sneak possession back multiple times, leading to some great shots on their side. We worked best in the 3rd quarter when Megan (LVI) was on a role and got a string of goals, but unfortunately this wasn't enough to secure the win.

Player of the Match: Eva (UVI)

A slower start for the 1sts this week, taking to the court in cold and windy conditions, but this didn't stop player of the match Eva (UVI) from having two excellent games, making strong interceptions and linking the ball into the shooting circle well.

Unfortunately, both teams were stronger on this occasion beating the QM girls, however the girls came off court keen to play both teams again to show what they can do!

Great performances by the Seconds in both games, supporting each other on court. There were some nice passes going down the court from defence to attack.

The team held on well against Pocklington, taking a win from them. A tougher game against St Peter's, but they didn't let this deter them and were in good spirits throughout. Great effort girls, well done.

Player of the Match: Maya and Emilia (Year V)

First game of 2022 for the Third team and it was lovely to see the girls back on the court who have not played since Year III.

There were two fantastic debuts from Maya (V) and Emilia (V), both making some fabulous interceptions. With lots to take away from the matches, the Thirds look forward to their next game.

Player of the Match: Bonnie (UVI)

With most of the squad having already played two matches earlier in the day, the girls were buzzing for a final match out in the cold at RI.

They worked hard and had some lovely links up the court, allowing for some great set plays and working around the circle to allow for some great shots from Julie, Jen (V) and Elsa (IV).

The two teams were neck and neck for a long time with RI just stealing it back in the second half, but QM hung on and managed to secure 2 points by being within 5 of the final winning score. Great finish to the day.

The team of Daphne, Nancy, Emily and Ellie returned to our home tennis courts against St Peter's. All started on their Singles first, and the standard was as though we were at the Australian Open, albeit it in colder conditions.

With some excellent rallies on both sides of the court, our team was unlucky to be 3-1 down. The doubles games again showed how well they were playing, but it ended in a 4-2 loss - such fine margins in this match.

A great Queen Margaret's attitude and focus, and a pleasure to watch our skilful players.

U14 VII Netball v The Mount