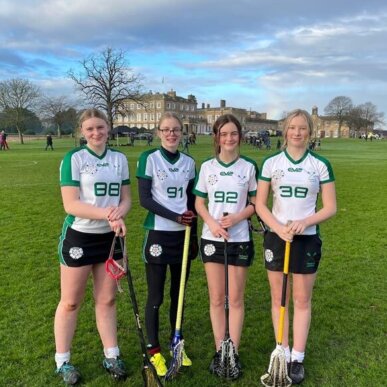 A frosty day saw the netball fixtures brought inside at QM this week. The 1sts took this as an advantage and came out strong from the first whistle.

It was a closely fought match in the first half, seeing goals at both ends with only one point separating the teams in QM's favour. Players of the Match Emily and Rose stood out on court for their superb interceptions, gaining valuable turn over balls which were converted to goals in the third quarter, giving QM a healthier lead of 5.

Ampleforth were hungry for a win in the last quarter, but couldn't quite get there, leaving the final score at 21-19.

U13 demonstrated some excellent play in their fixture against Ampleforth. Starting off slowly, the score was only 1-1 at quarter time. This soon changed after a tactical team talk. Taking advantage of what they have recently learnt in lessons and club, the girls soon pulled away, taking the score to 10-1 at half-time.

The ball was linked superbly down the court between Francesca and Poppy, earning them Player of the Match titles. The girls continued to dominate the game until the final whistle, taking the win 17-6.

The U14s had a tough act to follow on Saturday. After two QM wins and with limited players on their team, they were feeling the pressure. The girls worked well but were a bit chaotic in the first quarters, giving away possession quite easily to Ampleforth. Once they settled, they worked hard to get the ball up to our shooting circle, but Ampleforth fought back hard.

The girls worked well in defence but were just a bit apprehensive when defending the shot, and so with a bit of work on this, they could really up their game overall. Well done to the girls and keep up the good work!

A well fought game against Ampleforth with a lot of good movement up and down the court from both teams. QM showed strong centre court play, even when under pressure.

Our attack really had to work the ball around the circle to get the ball into shoot. A close game overall, with QM proving to be just too much in the last quarter.

A game which did not reflect the final score. QM worked so hard to progress the ball up the court, time and time again coming back from sterling defence, passing through the centre court, and into the goal third.

The girls worked the ball well around the circle edge, but unfortunately didn’t always manage to convert the shot.

Yorkshire came 4th in both the A and B Tournaments.

Well done to following girls playing in Yorkshire U15 Tournament:

Mavericks A vs Hemingborough Hawks

Mavericks A were in action again this week against Hemingborough Hawks. Starting out strong, Mavericks took an early lead by 4 goals, with some excellent play from Player of the Match Jennifer who held her space in the circle well for the long pass.

A few easy mistakes were capitalised on by Hawks, which saw mavericks lose their lead into 3/4 time. Although they fought hard in the last quarter, Mavericks couldn't quite pull back the win, losing 52-47.

A superb end-to-end game for the 1sts again this week. With scores level at quarter-time, QM fought well against Silcoates who took the lead going into half time.

QM pulled away in the third quarter following some superb interceptions by Florence, who also linked the ball well down the court, and some excellent shots from Jennifer. Overall, it was an excellent team effort and QM took the win 36-27.

The team was ready to go from the off, competing for every ball from the start. They worked the ball from the centre pass and got off to a great start, converting everything.

Defensively we were strong, keeping Silcote's shooters out of the circle and intercepting some amazing balls. A real team effort.

The competition comprises of 4 singles and 2 doubles matches.

Our UVI team of Daphne, Nancy, Emily H and Ellie, won 5-1. What a team, showing professionalism, spirit, and a great start to the 2022 season. Well played.

Team of the week: 1sts Netball & U13 Netball

U13 Lacrosse vs Bolton

U12 lacrosse vs Bolton