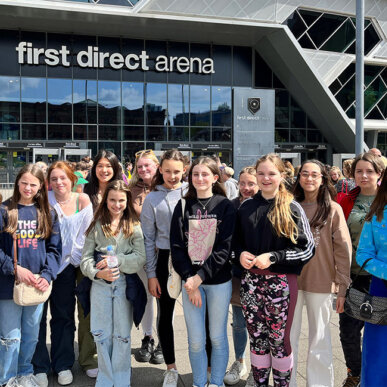 Read the latest sporting news from Queen Margaret's. This week: a quiet one with no fixtures to report on, but some great news from outside of school.

On Sunday, a group of us went to watch Leeds Rhinos play against Manchester Thunder in Leeds. It was a fun afternoon out for all.

For some girls, it was the first time they had seen Netball played professionally. The game was a win to Manchester Thunder, but the girls got to watch some high-quality netball and enjoyed the half-time entertainment.

The highlight of the trip was certainly getting the chance to meet the players at the end, with some girls getting their new caps signed.

The girls really enjoyed the trip:

"I liked the netball game and I found it very exciting. I loved that my first netball game was in this occasion!" - Lara (Year III)

"I really enjoyed getting to watch professionals play." - Grace (Year I)

"It was so great to meet the players at the end." - Harriet (Year I)

Not only did Polly take 1st Place with her Pony Club Team, she also took top spot in the pairs competition with Daisy (LVI), qualifying for the Zone finals in July.

In the coming weeks, Polly will hopefully be entering Belsay International Horse Trials, then competing at Bramham Horse Trials on both Saturday and Sunday with her Pony Club Mounted Games Team.

The following week she will be competing in the Under-15 European Mounted Games Pairs.

Well done Polly and Daisy! Keep it up.