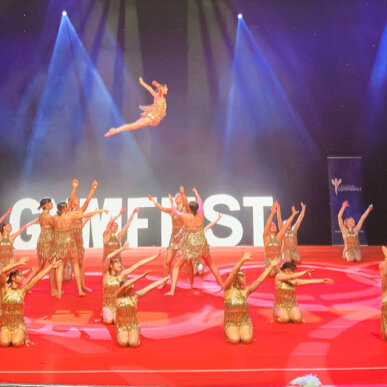 Read the latest sporting news from Queen Margaret's. This week: lots of tennis including the Chapman Cup and group matches vs St Peter's. Plus an update from Scarlet (Year III) about her involvement in the Leeds Senior Display Team and two lacrosse stories from the girls outside of school.

The U14 team for this competition comprised two U14 players and two U13 players, each playing one singles match and one doubles match against five teams.

It was a long day of tennis but they won some great games with all girls winning at least one game against some tough competition. They should be proud of their efforts.

Well done to Blanca (YII) and Celia (YII) for getting 3rd place.

A successful trip to St Peter's with the U15 A+B and U14 A+B. The U15s put up a hard fight against the tough U15 St Peter's A team, showing some great Tennis but losing out to them.

U15B had some close games and contested well across all the matches and came out with a 5 - 4 win.

The U14 teams - made up of Year III and Year II girls - entered St Peter's quite nervously for their first Tennis match of the season. They came away ecstatic to have won. U14A won a closely contested match 5 - 4, while the U14B managed to leave with an 8-1 win. Both teams showed some excellent Tennis and a huge improvement across the afternoon.

One of the aims of the day was to improve the doubles partnership and teamwork which all of the girls proved to do brilliantly. Well done to all the girls who played.

What a fantastic start to the tennis season. The sun was shining and the girls were on form. All games were extremely close and, where there were losses, it was only by one or two games.

Daphne and Nancy once again showed their great ongoing partnership, with some strong shots and tactical play. It was also lovely to see the Usher sisters demonstrating a strong presence and partnership on the court, losing two of their games marginally and a good win against the third pair.

Lily and Connie (UVI) played a steady three sets, communicating well with each other and outwitting their opponents on many occasions. Overall an excellent start to the season.

Scarlet (Year III) is a member of the Senior Display Team for Leeds Gymnastics. She recently visited Gymfest organised by Scottish Gymnastics and told us all about it...

"Gymfest is a series of non-competitive performances open to display groups all around England. Many people came from Scotland, but it’s a chance to show off your awesome choreography and acro skills."

"I am part of the Leeds Senior Display Team who represent GB. In the summer we are travelling to Switzerland for Eurogym where teams from all around the world can go. However, before then we have a few more Gymfests all arouphotond the country, including York and Liverpool."

Well done also to Olivia. Over the Easter break she played as part of the U15 North Regional Academy in the England Lacrosse Regional Academy. Olivia had a great time and played well - it's great for her to have this exposure to the game.

Olivia has been playing as part of the 1st Lacrosse team this year as year IV, and will be setting herself up well to join in all senior sports in September.

Stars of the week: Blanca (YII) and Celia (YII)

Team of the week: U13 Tennis players (who represented the U14 team)