Year LVI students presented a Scholar's Talk based on their project looking into the use of drugs in sport. Published 9th December 2021. 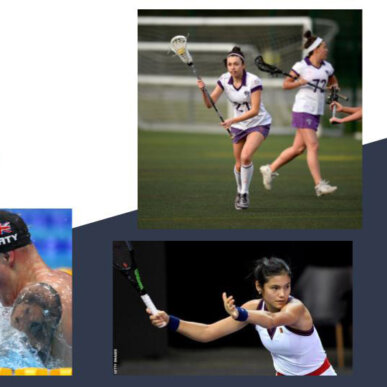 Last week’s Scholars’ Talk was a joint effort. LVI students Megan, Olivia, Nayama, Lauren, and Kitty gave an insightful talk about Drugs in Sport. They originally gave this presentation as part of their GCSE PE course.

Megan gave a summary of the talk:

"The Scholar's Talk which Olivia, Nayama, Kitty, Lauren and I did was on Drugs in Sport. Our talk included, reasons why an athlete would be drawn to taking drugs, different types of drugs, what you can do to help friends you suspect are taking them, and more.

A fact that came up was that 'up to 1 million people in the UK are taking anabolic steroids and other Image and Performance enhancing drugs'. We hoped to get the message across that even though drugs are becoming increasingly common in the modern sporting society, especially as technology advances, we can avoid taking them and still become the athlete we desire to be.

We gave examples of athletes whose careers were damaged by being caught with drugs in their system, and showed that it can have a detrimental effect on sporting careers and sponsorship as well as damaging the athletes physical and mental health. I enjoyed giving this talk alongside the atmosphere that the Scholars Talk gives. Thank you to Mr Grant for asking us to come forward with this presentation and for everyone who came to listen!"

You can view the slides of this presentation below.