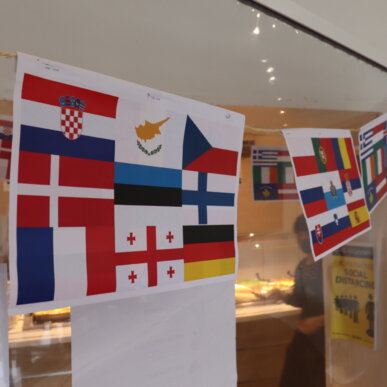 On Monday 27th September, students and staff came together to celebrate the European Day of Languages. We saw fun activities and decorations to mark the day.

There are many members of the QM community who speak a different language, or who are actively learning to do so. Fittingly, the European Day of Languages is the perfect celebration of linguistic diversity.

It's a day we've marked for many recent years, championed by Miss Leclerc and the Modern Languages' Department. And while the official day was on Sunday 26th, we wanted to carry the celebrations forward into the beginning of the school week!

Miss Leclerc tells us about the day...

The day started off with an assembly run by the Head of Languages (me!), highlighting the benefits of learning languages - from understanding other people and cultures around the world as well as enhancing future career opportunities. Harriette (Year V), Millie (UVI), Tilly (UVI) and Nancy (UVI) all contributed to the assembly, explaining why they were enjoying studying languages at GCSE and A-Level respectively.

The assembly was also an opportunity to hear some of the languages spoken by the overseas girls and some staff at QM. There was even a message from Madrid from Xanthe de Wesselow and Jessica Powell who both studied A-Level Spanish last year and are currently living in Madrid working as au pairs in their gap years!"

As always the day had a cross-curricular feel to it with girls being greeted in different languages around the school! A Year V English class enjoyed comparing poems in French, Spanish and German and girls in their History of Art classes focussed on foreign words and phrases useful for analysing art. In Latin, the younger years looked at connections between Latin, Spanish and French numbers. In Languages' lesson, there was a focus on songs and tongue twisters which brought a lot of fun and laughter to the day!"

Year II was busy creating some delicious-looking French crêpes. While lunchtime was an eternity away, this seemed like the perfect morning snack!

Our wonderful catering team went to great effort to decorate the dining room and create a special menu for the European Day of Languages.

There is a great deal of work and preparation that the catering staff put into making events like this so special, and it's very much appreciated by us all. Merci bien!

Poem of the Month

Submitted by Mr. Payton, here is QM's first Poem of the Month to mark the new academic year - a September poem by Bertolt Brecht.

You can read it in German - to experience the poem at its most beautiful - but I have included an English translation for those of you whose German requires a little more work. The poem was set to music for Brecht's play "Baal" in 1923.

English version:
Remembering Marie A.
One day in the blue month of September,
Silent, beneath a young plum tree,
I held her in my arms,
my pale and silent love,
Like a lovely dream.
Above us, in the summer sky,
I saw a cloud, which, for a long time, I watched.
She was so white and tremendously high above me.
But when I looked up, she was never there.

Here are links to two recordings of the song - sung by Angela Winkler in German, and David Bowie in English (yes, David Bowie - who was in a BBC production of Baal in the early 1980s). Enjoy!