Zines To Explore The Baroque Times 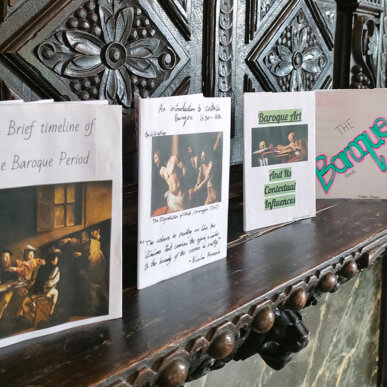 Upper Sixth students have been exploring the historical, political and social context of the Baroque era. They created their own Zines to summarise this work.

Zines (pronounced "zeens") are magazine-like publications with a mixture of imagery and text. Traditionally, they were DIY publications that could be produced away from the mainstream!

Our Upper Sixth Zines visually document the students' explorations of the Counter Reformation, the Council of Trent and the Thirty Years War.

This is based on their investigations into the impact of the rise of Protestantism and the Catholic Counter Reformation on art and architecture. The political face of Europe changed dramatically during this era. Students have also been discussing how these events impacted on the style of artists such as Caravaggio, Bernini, Rubens and Artemisia Gentileschi.

Each Zine is a visual reflection and summary of their introduction to this period of study, known for its uncomplicated iconography, dramatic staging and non-idealised naturalism, designed to involve the spectator.