One of QM's most prestigious legal alumnae visited the school to talk about her life, education, and career. Published 8th March 2022. 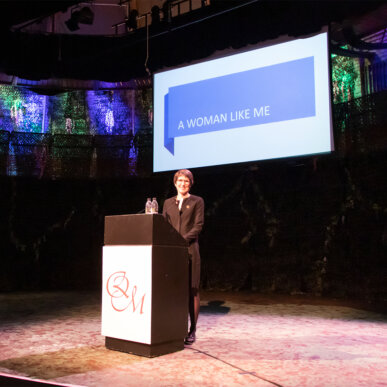 Queen Margaret’s School for Girls (QM) was delighted to welcome one of its most prestigious legal alumnae and one of the most respected and recognised names in law.

The Right Honourable Lady Justice (Dame Eleanor Warwick) King spoke to students about her education and lifelong friends at Queen Margaret’s School and Hull University. She also talked about her career in law and how she ultimately progressed to a High Court Judge in the Court of Appeal.

As well as talking about her successful career progression, Dame Eleanor discussed the challenges of navigating a male-dominated environment in a society geared towards traditional gender stereotypes. She gave invaluable insights into topics her career has touched, including free speech in the face of criticism, and many high-profile cases she has worked on.

Dame Eleanor went on to give practical advice to students considering a career in law, from the different areas of work, to the types of jobs within law.

She also highlighted the gender imbalance that is still evident today, with only 28.2% of women making up the Bar in 2020 and only 16.8% of female QCs. This is despite the fact that women make up 60% of new entrants into the profession legal since 1990.

Dame Eleanor’s advice and belief is that the attrition rate in law (and other areas of work) must be tackled. She described how, since being appointed Chair of the Judicial College in 2020 (to train all upcoming judges), she has established a serious exercise in diversity, inclusivity, and bullying.

Sixth Form student and Head Girl Emily, who is planning on studying law next year at university, said it was “incredibly inspirational to hear about the high-profile cases she has ruled on, and the challenges she encountered as a woman on her way to becoming one of the country’s top High Court Judges.”

Dame Eleanor’s parting advice to the girls of QM was to put family and friends first, know that self-belief doesn’t equal arrogance, know that ambition is good, know that you must always work hard - regardless of intelligence, and to banish imposter syndrome. She advised girls to make the most of their fabulous education at QM, and see the huge benefits of single-sex study.

Dame Eleanor King is a former pupil of Queen Margaret’s, as well as a former Chairman of the Board of Governors. Her four daughters all attended QM, and her husband is QM’s Director of Administration & Compliance.

After studying at QM, Dame Eleanor went to the University of Hull to study law, before forging a hugely successful career. She was called to the Bar (Inner Temple) in 1979, and went on to become Queen’s Counsel in 1999. She was appointed as a judge in the High Court, Family Division in 2008, when she was also appointed D.B.E. In 2014, Eleanor was promoted to the Court of Appeal as a Lady Justice of Appeal (Civil Division) and was appointed to the Privy Council at the same time.