Friday 23rd July 2021 marks 120 years since Queen Margaret's was formally dedicated by the Archbishop of York. 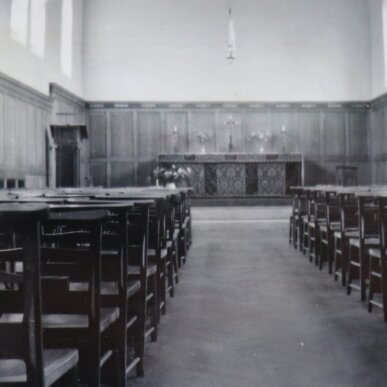 In July 2021, the School reached a very important milestone - 120 years of students, achievements and the QM Family. On 23rd July 1901, the Archbishop of York formally dedicated the School "to the work it was intended to do". The day began as many important days do at QM now - with a celebration in the Chapel followed by a gathering of many staff, students, parents and friends of the School.

To celebrate the School’s 120th birthday, we’ve dived into the archives to find some fantastic 'then and now' photos to showcase the School throughout the years.

Named after Queen Margaret, Queen of Scotland 1070-1093, for her practical charity, optimism and energy, Queen Margaret’s was initially established in Scarborough by the Woodard Foundation in 1901.

Bombardments and the Wars

During the First World War, two German battleships bombarded the undefended Yorkshire town for about half an hour. Feminist author and former student, Winifred Holtby, recounted her experience in the Bridlington Chronicle. Eating breakfast with fellow students, she recalled hearing banging, which she at first thought was someone falling over.

“Then someone whispered ‘guns’. The word, like magic, passed from mouth to mouth as we sat white-faced but undismayed, with the uneaten food before us,” Winifred wrote.

The School was evacuated, and the students marched three miles to Seamer, carrying a sick teacher and ration of biscuits, before being relocated to Pitlochry as a result.

Queen Margaret’s returned to Scarborough once the First World War was over, only to be evacuated again in World War II, this time to Castle Howard.

It wasn’t until 1949 that the School arrived in Escrick Park, where it has been ever since. This magnificent country house, that was built with the assistance of John Carr in 1758, is now a home from home for our girls.

In 1986 the School was re-established under a new company limited by guarantee and registered with the Charities Commission. At the same time the School became independent of the Woodard Foundation. Since then almost £10 million has been invested into new and improved facilities, some of which you can clearly see in the images below.

Although the boarding accommodation has been modernised, the girls still enjoy their home comforts all the same.

Another tradition that has stood the test of time is the QM girls' love of Horse Riding, the horses at the Queen Margaret's Riding School have been a familiar sight at the front of School over the years.

Find out more about the history of our School and see more pictures from the archives here - QM History.