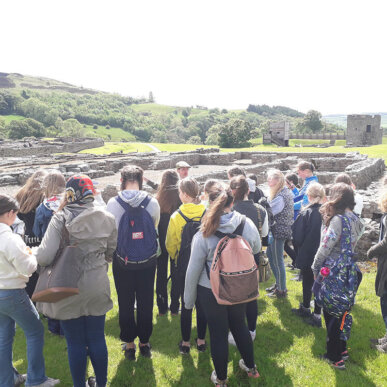 Last week, Years I and II visited Vindolanda - an auxiliary fort along Hadrian's Wall and one of England's most important Roman archaeological sites. The girls learned how nine forts existed on the same site, and how soldiers from all over the Roman Empire were garrisoned there. As an active archaeological site, Vindolanda proved to be a fascinating excursion!

The girls also visited the Roman Army Museum to learn about the life and work of a Roman soldier, including their duties, equipment, training, and daily life.

Megan (Year II) told us more about the trip.

"Hadrian’s Wall was an incredible experience that you don’t often get to do with your friends during school. We had a short hike up to the wall, but once we were at the top, it was not worth looking back - the views were amazing.

The Roman Army museum was one of the best trips ever as we got to see a short movie about the Romans, which was amazing as it was in 3D. We all enjoyed the trip and found it fascinating to be able to experience.

Thank you to Mr Grant who organised it and educated us all on the fascinating Roman history of Vindolanda, Housesteads Fort, and Hadrian’s wall. Thank you to Miss Bale, Miss Badger, Mr Fairnington and Mrs Seeny for the wonderful trip and for looking after us all."