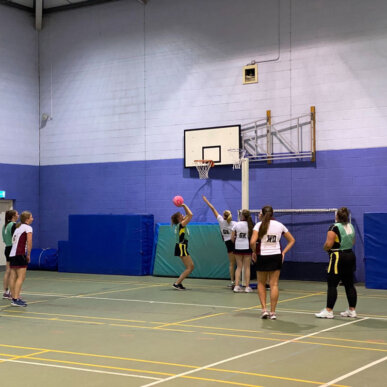 This week saw group hockey fixtures v Ampleforth, some fantastic news from one of our catering team, and more...

After progressing through my round-robin group stage, I went on to play in the last 16 knockout round, then on to the quarter finals stage, semi finals, and right through to the final.

After a long day from 10am-8:30pm and a hard-fought final, I eventually claimed the National Singles title by 1 shot on an extra end."

Hockey fixtures from the week

It was a beautiful day up at Ampleforth where we found there was plenty of support from both sides. The match started in a frenzied fashion, but unfortunately we were soon down a goal due to a short corner. It was a tough game, but in open play we were evenly matched.

Unfortunately our weakness was giving away too many short corners, hence a disappointing 7-0 loss. This year we have the foundations of a fantastic team that has so much potential. Once our fitness is up, we should see some exciting results improving!

I would just like to take this opportunity to thank Miss Hagan for enthusiasm and words of advice and support. I hope she is settling in well! There were a few players that stood out for me throughout the game which were the new fifth year girls [Flo, Jenifer, Kitty, Bonnie, Kitty and Amelia]. Let's hope this weekend we can win! - By Lucy (Year UVI)

The Second Team hockey match on Saturday against Ampleforth was great, being one of the first matches after a long time off. Despite Ampleforth scoring in the first half, QM managed to dig deep and defend well in the second half, stopping any more goals. It was great to be back and the weather was lovely. We look forward to future fixtures. - By Ellie (Year UVI)

Last Saturday we played Ampleforth College in a hockey match at home. Everyone played so well, especially Pippa, Ilaria, and Flo. Pippa saved some hard shots, while Flo and Ilaria worked well passing up the field to the mids and forwards. Despite everyone's hard work, we sadly lost 0-2. - By Tessa

Match report: It was very exciting to be back on the pitch after around 18 months of not playing any matches. Although we lost, we played very well as a new team. The weather was very hot, but it was good to see the sun in September. - by Tabby

On Saturday we played Ampleforth U13 and we won 2-0. In the first half, we scored 1 goal and formations were really tight. Our goalie Rhiannon saved a great first goal after only 2 training sessions - she was really amazing.

In the second half we scored our second goal, both being scored by Isabel, working hard with Fran in the D. Our defence was just as strong, and we did really well. I got player of the match, but the whole team played great! - By Sophia

With the first round of their cup competition, the girls were feeling the pressure. They came out fighting, but Wakefield put them on the back foot quite quickly. Wakefield applied fantastic pressure, but our strong defensive line - led by Sophia - fought hard to keep them out.

Francesca managed to sneak a goal back for QM, but unfortunately it wasn't enough. The girls worked together really well and had a lot of passion for the game, and are more than ready to take on their next opposition.

Player of the match: Emilia & Florence (both Year V)

On Wednesday, the U16 team traveled to Pocklington to play their first match of the season. This was a great success with a 7-0 victory. Everyone came together as a team and played exceptionally well. Anna (Year IV) and Olivia (Year IV) scored one goal each and we give a 'well done' to Zoe (Year V) for scoring two goals, as well as Florence for scoring a hatrick.

Emilia (Year V) and Florence (Year V) were named as players of the match. Well done to everyone who played, and thank you to Miss Hagan and Miss Davies for the great afternoon out.

Mavericks returned this week with a friendly pre-season home fixture against Read Ladies, but unfortunately didn’t bring home the win. A score of 41 - 31 did not reflect the strong netball played by the girls.

It was great to all be playing together again and back as a team. Miss Bale was awarded ‘Man of the match’ with other great play from Jennifer (Year 5), Hattie (Year 5), and Nayama (Year LVI) - all making their Mavericks debut.

Also, special mention to Miss Hagan who stepped up, played AND umpired - despite not playing netball for years!! We are all looking forward to the season ahead whilst taking away points to continuously improve on. - By Delphine (Year UVI)

QM faced Bootham in the first round of the Sister in Sport cup on Thursday. Windy conditions were not ideal for either side, but that didn't hinder their play. Bootham took the advantage in the first quarter taking a healthy 7-goal lead.
After a quarter-time reshuffle and team talk, QM came back fighting.There was some excellent defensive play from player of the match Tessa (Year IV) taking a win in the second quarter, however this was not quite enough to win the game. Bootham made an excellent comeback in the final quarter, taking the game to a 27-16 loss for QM.

Team of the week: U13 Hockey