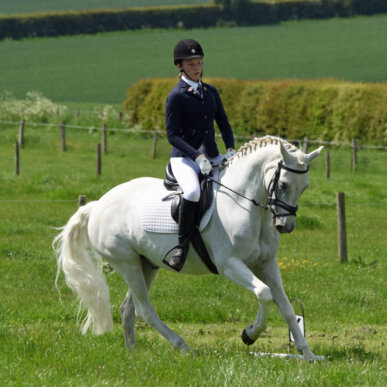 Welcome to the new weekly Sports Review as part of the Weekly Window newsletter. Here you'll hear about the week's fixtures, match results, and any other sporting news of the week.

It's a bumper edition for our first review! Click to skip ahead:

Sporting fixtures from the week

Upcoming fixtures for your diary

This summer saw more dressage success at the champs for both Eve (Year IV) and Anna (Year UVI), following qualification at the area competitions earlier in the year. Freya (Year III) also showed success with her riding over the summer.

In early August, Anna competed in the National Dressage Championships in Offchurch Bury, Warwickshire and was placed 9th in her class.

Later in August, Eve competed in the Regional Dressage Championships in Ashbourne, Derbyshire. She was placed 4th in her class as an individual and the team was placed 6th (out of c. 26 teams and 100+ competitors).

Freya (Year III) won the Pony club grassroots Championships at Eland Lodge Eventing, representing the Vale of York Pony Club. There were a total of 120 riders coming from all over the country who had qualified for the championships. She and her team also took 6th place in the teams dressage.

In Freya's own words:

“On Sunday I competed in the British Eventing competition at Frickley Hall in the BE80 section with my horse Abbie. It was only our 2nd Affiliated British Event, and it is quite a prestigious venue.

Abbie and I did our best Dressage test yet, which left us in joint-1st place with 28.5 penalties. Most of the other competitors I was up against were seniors and on big horses. We needed to go clear to secure the first place position into the next stage which was Cross Country - our favourite part!

The other competitor, who we were lying joint-first with, dropped a couple of poles which took the pressure off slightly, but it was close scoring at the top, so we needed a clear round to retain our position. Abbie was quite fast around the course and slipped on the grass on one of the turns, but jumped really well and we went clear.

This left the Cross Country course! Abbie and I went clear and were inside the time, securing our first place. We had the best score out of both sections which was approximately 66 partnerships. We won £150 which I'll no doubt be spending on horse accessories.

Abbie and I have had an amazing first season of eventing together and during the summer we won the Pony Club grassroots Eventing Championships 2021 at Eland Lodge. This was out of approximately 130 competitors altogether and 35 in my section. We had qualified for this event, so it brings together the best regional Eventers in that category to fight it off on the day in the Championships. I’m proud of what we have achieved together. We’ve worked hard but had so much fun this summer training at pony camps and events."

In her own words:

"Today (Thursday 16th of September) I took part in the British Dressage National Championships at Somerford Park. Despite being in the equestrian world my entire life, I was unsure as to how big this event was until we arrived there; I was met with trade stand after trade stand and masses of grandstands!

The competition took place over three arenas and is the top class dressage competition. It features the top 700 combinations from across the country, in gold and silver sections from Prelim to Grand Prix. A few minor blips in our test left us with a score of 65.69%, which was a little below our expectations but is a fantastic result for our first BD Champs as one of the youngest riders at the competition.

It was an amazing experience, and as we were getting ready to go home, Charlotte Dujardin and Carl Hester (Olympic Gold Medalists) moved into the stables directly opposite ours! I am now looking forward to moving up the levels with my wonderful horse Harry, and have already qualified for the Winter Regionals."

They had a fab afternoon with Netball, Badminton, Temple run , Swimming, Tennis and Cardio.

"England Rounders is something I have enjoyed very much these past two years. Unfortunately I have now come to an end with it but am very proud to have been able to be in the team and am grateful that I was given such an opportunity.

Although our rounders has been limited over the last couple of years due to Covid, we still managed to get involved in as many training sessions as possible and just managed to fit in a match against Wales this summer which I thoroughly enjoyed.

Throughout my time with England Rounders, I was able to learn more about the sport and improve my skills, meeting new players who had the same passion as me and were just as excited to be playing for the team.

We experienced different things, such as being able to test our skills any play against the older teams, as well being photographed by a professional photographer and get those action shots in. Not to mention the extra shots that were taken during match play by parents.

To come to an end with England Rounders, I would like to say thank you to the team and coaches for making it such a great experience and giving me the opportunity to play for my country.

To anyone who has an interest in rounders, please go for it and sign up for the trials as soon as you can. Be bold and be brave - you can do it."

A Triathlon (and more) of Events Over the Summer for Ellie

Ellie (Year UVI) had a very busy summer with multiple runs plus cycling and swimming!

In her own words:

"In the holidays I completed my half marathon and Total Warrior [a challenging mud run with "25 punishing obstacles, 10 tons of ice, and 100 tons of mud"] for charity, both of which I really enjoyed. Thank you to everyone who donated! I managed to raise £170.

I also cycled the Way of the Roses route (Morecambe to Filey) in two days after I managed to persuade my Dad to join me for my birthday. At the end of the holidays, I also did a sprint triathlon with a 400m swim, 24km bike and 4.6km run, as well as a 10km race last weekend which I really enjoyed and hopefully will do more of in the future!

Mrs Rastall (accompanied by myself) completed her swimathon last Saturday, raising money for the Macmillan Cancer Research charity. The swim was 5km in the school pool, which is 200 lengths. Mrs Rastall was extremely fast and I could not believe how quickly she finished!

If you would like to sponsor Mrs Rastall, pleasego to her JustGiving page where you can donate as little or as much as you like! Well done, a great achievement!"

Fixtures From The Week

With the first match of the season being the first round of a cup competition, there was great pressure on the U19 team travelling to Queen Ethelburga's.

The girls started with great determination and fought hard to keep QE out of our own circle. Unfortunately, QE took their chances and managed to score within the first half. The girls regrouped and came back fighting with strong counter attacks into QE's circle during the second half.

Despite fantastic passing between our midfielders and forwards, QE managed to return, leaving the final score at 2-0. Unfortunately, this puts the U19s out of the cup, but it was still a performance to be proud of.

Team of the week: Omnikin