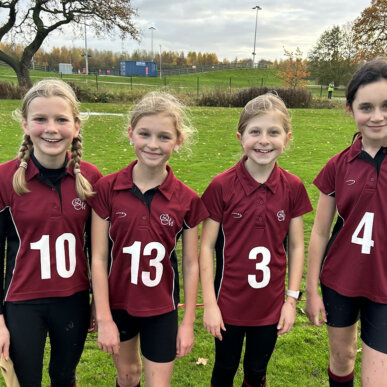 This week, read about the U15 Netball v Millthorpe, Mavericks A & B teams vs Haxby (with an incredibly close game for the As!), and the York and District Schools Cross Country.

A decent team effort by the U15s - despite a few jittery nerves for their first-ever netball match of the year!

The team kept their spirits up throughout and seemed to enjoy playing a competitive match. Even though the team lost, they still gained one point for getting more than half score. Well done U15s!

Player of the Match: Kitty (UVI)

It looked promising after the first quarter with Mavericks B down by four goals. However, the Haxby shooters soon found their aim and were scoring consistently.

A Mavericks injury in the third quarter meant the team had to switch up positions to ensure both the attacking and defending ends were covered.

Perhaps an aim for the next two games is to try to get half score in order to earn one point.

Player of the Match: Bonnie (UVI)

If there was ever a need to describe a 'game of two halves', then the Mavericks A match against Haxby 4 would definitely be it.

The first half was awesome with the As leading 23-6: surely a massive win was in the bag. Then the third quarter syndrome kicked in, with Mavericks losing their way as Haxby won the quarter 11-5.

It was a good job the As scored so many in the first half as Haxby continued to score into double digits in the final quarter. Phew, a lucky escape for Mavericks A.

On Tuesday, the cross country team went to York Sport Village for the York and District Schools Cross Country. Despite the extremely muddy conditions, everyone gave 100% and supported each other's races.

Being the first QM XC event in a long time, I think we did great - well done! Amanda & Emilia both qualified for the next round in Skipton in January. All did very well as there was a large number of girls in all the races.

Team of the Week: XC Team