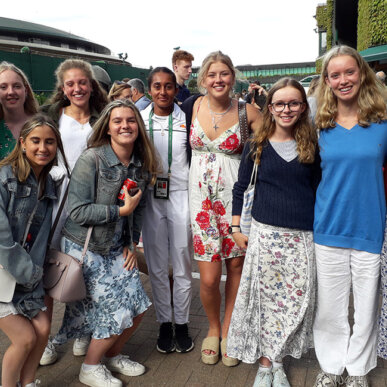 QM was delighted to have our name pulled out from the LTA Youth Schools Tennis Wimbledon ballot and receive 10 tickets for Wimbledon's No.1 Court.

A trip from QM hasn't been to Wimbledon in over 13 years, so there was a lot of excitement as we departed on our train journey to London. With a whizz across London on the tube to Southfields, followed by a quick walk towards the grounds and into the All-England Club grounds, we arrived in time for a set of matches on Number 1 court.

With the new roof closed on the first match, we watched the men's Number 4 seeds: Tsitsipas from Greece, then I. Świątek (the women's Number 1 seed) followed by Britain's Jack Draper.

We were privileged to witness some outstanding tennis in the most iconic sports arenas. A special moment was meeting Naiktha Bains, the world no. 190, for a Q&A with her tennis coach outside the media centre and near the Player's Lounge.

It was a truly inspirational moment, to gain an insight into the life of a professional tennis player at Wimbledon.

On the train home, we had a special mention by LNER on their ticker tape: "Hoping QM School had a wonderful day at Wimbledon!" A fantastic trip and fingers crossed our school is drawn out again as our students had the most fabulous time.