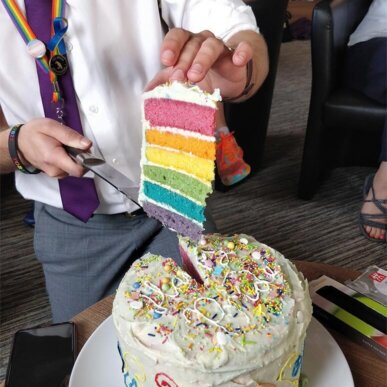 Every year, June is dedicated to celebrating LGBTQ+ communities around the world. Pride Month 2022 is an extra-special celebration as it marks 50 years of the Pride movement in the UK.

This weekend was York Pride, a charity event with live events and a parade to promote equality and diversity, and in particular the elimination of discrimination on the grounds of sexual orientation and gender identity of those living in York and the surrounding areas.

"Every year, I hear comments that because we've come so far, we don't really need Pride, or how it's not really much of a protest anymore. This, in my opinion, consolidates why we need it.

York Pride, in particular, culminates in a festival-style gathering. But it's the march and the parade themselves that are still very much a protest linking back to Pride's roots in the Stonewall Riots. It's a beautiful time to stand side by side with like-minded people and experience one of the biggest forms of protest, which is unity.

People turn their backs on differences, even within communities. So, to be deliberately inclusive is a huge thing; it takes a great deal of courage to stand in support of something. To me, Pride is the epitome of that love and support.

It's also an explicit show of support, which I believe to be hugely impactful. It's really not enough to just be 'quietly tolerant', as that can be mistaken for so many other things. We need to make an act of effort to be actively inclusive, even if that's really hard or going out of your way. It's worth doing, and will be remembered by the people who need that support the most."

This weekend, Mr Fairnington marked Pride Month and York Pride with his own contribution to the Saturday staff cake club in the form of a colourful Pride-themed cake!

Pride Month is celebrated in June as it marks the anniversary of the Stonewall Riots - a series of protests in 1969 in the US that changed gay rights for a lot of people in America and around the world. Pride Month promotes acceptance, equality, the work of LGBTQ+ people, and education about the issues affecting the LGBTQ+ community. Global Pride Day is on 27th June with plans for concerts and showcases.

Mr Henry Fairnington is sadly leaving QM at the end of this year, but Pride Club will continue with a tentative new name (yet to be confirmed) and a focus on everybody's rights: Inclusivity Club.

The club will continue to be a friendly and open forum to talk about homophobia, racism, ableism, and more.