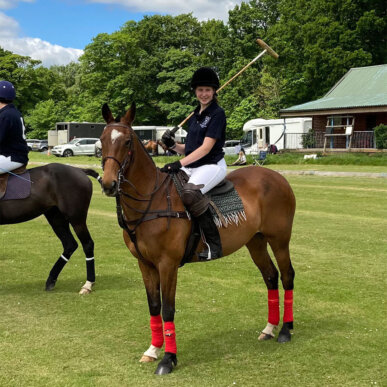 During the half-term holiday, our girls were involved in many horse riding activities.

During half term, Celia (Year II) played in her first polo tournament representing Edinburgh Polo Club. With her elder sister, Elsa, also on the team, they played some hard matches in beautiful sunshine and were lucky enough to come away winners.

Here’s what Celia had to say; “It was a really fun experience and I was lucky to have my father, an experienced polo player himself, giving me tips and encouragement from the sidelines as I haven’t been playing for very long. I think my riding lessons at QM have really helped with my horsemanship. I can’t wait to play in more matches in the summer holidays”.

Eve (Year IV) and Megan (UVI) competed in a team for the Vale of York Pony Club in the area dressage competition. They were placed third overall.

"During the half-term holiday, I had a lovely time representing my Pony Club at Bishop Burton College. I put in a good test with my horse Harry and the weather managed to hold up until our last rider finished her test.

Overall it was an enjoyable day spent with friends and I can now look forward to progressing further in my dressage."

"At the beginning of the half-term holiday, I competed at Shelford Manor in the BE100 section. It was my first eventing competition back after my mocks, so it felt amazing to be doing what I love again.

We put in one of the best scoring dressage tests in our section, which secured us a top-10 position for the rest of the day. Our showjumping round was very good but unfortunately left us with 4 faults to be added to our dressage score.

Lastly was the cross country (my favourite part of eventing), where myself and my horse had an excellent time, hopping hedges and cantering around the gorgeous venue.

We finished in 6th place on 35 penalties and were very thankful for the gorgeous weather, the well-organised event, and the beautiful rosette we got to take home!"

CRICKET: U15 vs Tranby

The team lost but put up a good fight in both batting and fielding roles. There were some amazing 6s and boundaries scored, with some great teamwork to keep the score totting up throughout the match.

Harriet (IV) and Illaria (IV) worked well as the first pair in bat, obtaining a great score of 26 from 3 overs. Each and every one of them batted well.

Pippa (IV) gave great communication and encouragement throughout. There were a few missed catches in the field, but the team soon warmed up and there were some hot hands on show!

Well done to all girls and we are looking forward to some more games.

The team of Hattie (III), Tabby (III), Scarlet (III) and Niime (III) competed in a singles and doubles competition against Fulford School.

This was their first-ever tennis match for Queen Margaret's, and although overall they did not win, our girls played very well and were a credit to our school. Excellent tennis.

The team of Leila (IV), Jess (IV), Harriet (IV) and Florence (IV) played both singles and doubles in a very competitive atmosphere.

The team lost 4-2 overall, but it was very close throughout all the matches and the result could have been our win. Well played.