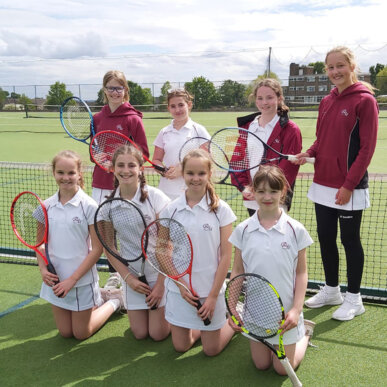 Read the latest sporting news from Queen Margaret's. This week: lots of tennis vs Ashville, St Peter's, and Ampleforth, plus a horse riding update from Megan (LVI).

For many of the girls, this was their first-ever tennis match. Everyone worked hard and learnt a huge amount from the experience. They came away more confident with tennis scoring and positioning on the court. Well done to all involved.

On Saturday 21st of May 2022, some of the Year IIIs and Year IIs played a few matches against Ampleforth. They had some amazing games and wonderful weather.

Here are some of their highlights.

Fran (II) and Celia (II) played for the under 14s tennis, also Miriam (II) stepped in for Bea (III) as she had hurt her knee.

The team started playing two singles and one doubles match and played some very accurate tennis to go 2-1 up. In the next round, our players in the singles displayed some excellent winning shots and all were very pleased to complete and win the match 4-2.

The team fought very hard in their singles matches with many of them playing deuce points in every game. The matches lasted over an hour and a half, with sadly a tight loss of 4-2. However, it was a great learning experience and improvements through the team were shown.

On Wednesday 25th May, we had three tennis teams playing at home vs Ryedale School in the U15B's and U13B's.

Some great tennis was played by all in both singles and doubles games. Congratulations to those who were playing their first tennis match for school, and for two teams winning on a deciding tie break to win their matches.

Player of the Match: Hannah (III)

A great experience for the girls to play the game competitively, even if it was against the year group above! They did wonderfully.

Hattie (III) was AMAZING in bat! Charlotte (III) captained the team well, Lucy (III) bowled accurately, and Hannah (III) was selected by Tranby as Player of the Match.

Here's an update from Megan about her riding over the weekend. Well done Megan!

"On the weekend beginning the 14th of May, I spent my time competing at Chatsworth International horse trials.

On the first day, Harry and I competed in the 1m Arena Eventing competition where we put in a very respectable round with only one pole going down. The arena was beautiful, and to be right next door to one of the water features for the main event was very special.

On the second day, alongside the rest of the team, I represented my Pony Club in the 1m showjumping which took place in the main arena. Again, we put in a very good round with only one pole getting knocked down. Hopefully myself and the whole team did the Vale of York Pony Club proud.

The atmosphere of two days' worth of crowds watching from the sideline made the event even more enjoyable, and I hope to one day compete in the 2* at Chatsworth."

Team of Week: U14 Tennis