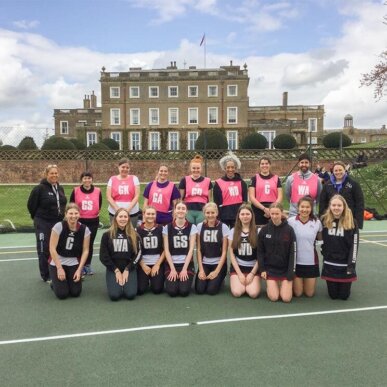 The much anticipated rematch of staff vs students Netball was played this week with great support across the year groups.

With new player Mr Aston taking to the court, nothing could stop the staff linking the ball well to goal.

Missing one of their shooters, many of the students put up a good fight in GA, but unfortunately it was not quite enough. At the final whistle, staff heads remain high for the second time, victorious once more.

This week saw the first QM house Omnikin competition. It was excellent to see all the girls involved working hard and striving for the win. Overall results:

Hunsley had a very strong team, but we competed well against them and enjoyed playing some great tennis -it was like being at Wimbledon!

South Hunsley won, however it was a delight to watch our players perform so well.

On a side note, it's wonderful to see the courts looking immaculate again after some cleaning and painting TLC during the Easter holiday!

Tennis Chapman Cup U14 (Away)

Tennis vs St Peter's (Home and Away)