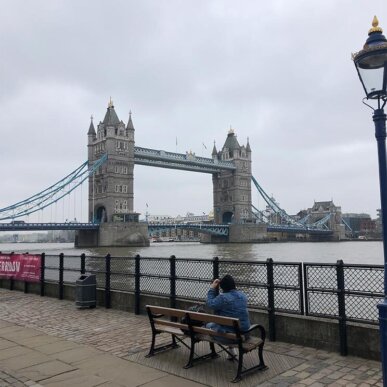 At the end of March, our Sixth Form historians visited London for an exciting trip. Megan (LVI) and Lucy (LVI) told us all about it...

"On 29th of March we travelled down to London where we would first visit the Tower of London.

We learnt a lot from the interactive rooms and the occasional Beefeater who told gruesome stories of past beheadings and disappearing Princes. We saw the prestigious Crown Jewels and visited the torture chambers after seeing the spot where Anne Boleyn lost her head.

For lunch, we visited Borough market which provided us with an extremely large range of food - all the way from watermelon juice to seafood paella.

Later we went to the German Gymnasium where we had a feast fit for Queens before setting off to watch the amazing Six. The music was fantastic and a very good way to revise Henry’s wives and their stories.

On day 2, we went to Hampton court, previously owned by Thomas Wolsey, and were astounded by the architectural design of the palace. We roamed around the grounds including the maze and the vast amount of rooms.

We finished our trip off with a delicious lunch in the cafe and set off back to York train station."

By Megan and Lucy (LVI).