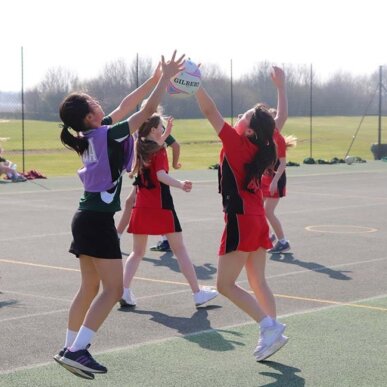 Player of the Day: Emily from Richmond House 1

Friday saw the 23rd Annual Junior Schools Netball Tournament held at QM. With Covid impacting the last two years, it was wonderful to welcome junior schools back to QM and they were so excited to be here.

As the Netball Tournament commenced, all teams played excellently and showed improvement along the way. After the Netball, lots of players then entered a cross country race around the QM grounds. On such a gloriously warm and sunny day, they all did amazingly to enter this race after having played 10 netball games.

Congratulations to Grantham Prep who took the team award home.

Once the scores were totalled, the final results for the netball were:

Well done to Richmond House 1 who remained unbeaten throughout the Tournament.

Over the course of the Tournament, QM staff were nominating players of each match which went towards the player of the Tournament. Runners up were Annabelle from Terrington Hall, Haruka from Richmond House 1, and Katie from The Froebelian School.

The winner of the Player of the Tournament was Emily C from Richmond House 1.

Congratulations to all the players who took part and thank you to all the schools for joining us, we look forward to welcoming schools again next year!

U13 had a superb last match of the season. The girls all worked well as a team, both in and out of position on the court, with some girls trying out Goal Shooter for the first time and scoring!

Player of the match Celia (II) worked tirelessly in attack, defence, and centre court. The team took the overall win 26-1.

The U13Bs worked really well on Saturday in the heat with only one sub! They improved lots as the game went on with better spacing and slower passing which helped the girls to work together as a team and allowed several goals to be scored.

Unfortunately Scarborough were more experienced and managed to score many goals, but well done to all for playing well in their last match of the season.

U15 B vs Scarborough

A neck-and-neck game with QM just one goal ahead throughout the whole match. A number of girls had only started representing the team in September, yet they all played really well.

Player of the Match: Grace (Year I)

The U12s got better as the game went along this week. With strong opposition, they defended well to try and win back the ball. Ready for next season, the girls need to focus on footwork and distance.

With many girls being exhausted from the play, they worked their socks off to give Scarborough a run for their money. They linked well through the court, but sometimes found it difficult to pick the right pass.

Amanda worked fantastically to put pressure on the Scarborough Shooter and managed to prevent her from scoring many times over and cleared the ball consistently. Hannah was also on form, scoring many of our goals as well, so well done across the board!

U15 started out strong this week, with only 2 in it after the first quarter. However, a change around of team for Scarborough saw them take a stronger lead, which they held for the rest of the game.

It was a fast and fierce Staff v Students Netball match this Wednesday lunchtime, we were exhausted just watching from the sidelines! The staff team was victorious with a 21-8 win.

"A highly competitive game between the staff and students this week, with staff taking a strong lead from the first whistle.

Mr walker made made his debut at GS, scoring an excellent goal for the staff which was matched at the other end by usual defender Olympia from the edge of the D.

The ever-competitive Sixth Form have challenged the staff to a re-match after Easter, when more of them are available to play!"

Stars of the week:

Team of the week: