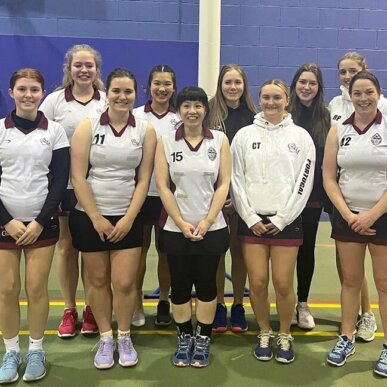 This week: two lacrosse tournaments, a fantastic win for Netball 3rds and a draw for Netball 2nds, a very close win for Mavericks B, U14 Netball vs The Mount, and more.

Players of the Day:

The U14 North Schools Tournament was held at Moreton Hall on Saturday 5th March. We took a joint 17 mixed Year IV & Year III team. The players travelled down in high spirits to take part.

With the weather in the lead up to the tournament being so wet, the field pitches weren't playable so the tournament moved onto Astro. Lacrosse is a very different game on Astro, with the bounce of the ball changing it up dramatically.

QM played 6 matches and made big improvements as the day went on. The team spirit was incredible and atmosphere was great.

Well done to all those involved, we are looking forward to taking you stepping up to your next age group lacrosse tournaments next year.

Player of the Match: Nayama (LVI)

A windy game this week at Barnard Castle which was very stop-start due to multiple injuries to the opposition.

Starting out strong, Barnard Castle took the lead, but after a quick quarter-time talk, QM found their pace and brought it back level at half time, with some excellent shots and interceptions demonstrated on court.

With the score level going into the final minute, both sides were hungry for the win but neither was able to convert to goal and the game ended a tie. Nayama (LVI) earned the Player of the Match title for her superb play out of position at C!

3rd team went out in great spirits and were totally focussed. They dominated play throughout the match and worked hard to maintain their lead.

The girls linked well down the court to our attacking circle and then converted to goal the majority of the time. When defending, girls were aware of where the ball was being placed and utilised their knowledge of intercepting on many occasions. A great game.

Players of the Day:

The U13 Yorkshire Lacrosse A and B teams were made up of both QM and HLC students. The girls travelled over to the Oxton Sports Club in the Wirral.

Representing QM in the Yorkshire A team was the Year II girls Isabel (Captain), Freya, Francesca, Isabel, Sophia and Celia. In the Yorkshire B was Blanca Garcia- Tizon (Captain), Camilla (II), Annabelle (II), Harriet (I), Grace (I) and Sadie (I).

Well done to all the girls who have been through the county experience for the first time. So much grit and determination was shown, and so much learnt for the future. Looking forward to seeing you all develop further as lacrosse players in the years to come.

NETBALL: Mavericks B vs Royal Femails

Player of the Match: Miss Hagan

A great penultimate game of the season for Mavericks B. They went out strong from the start and took the lead. Every player on court worked tirelessly throughout the game and demonstrated some superb Netball.

The atmosphere was like that of a final, with the sideline cheering on every superb goal. It was a nail-biting last few minutes as Royal Femails started to catch up with Mavericks B, but they managed to hold the win with the final score 43-42. They hope to bring the same energy to the final game next week.

Player of the Match: Rose (UVI)

It was great to see so many girls playing for the final Mavericks A game of the season. The game started incredibly close, with only a few goals in it. At 3/4 time, an unfortunate injury caused disruption to the Mavericks team, throwing them off their game with Read School Ladies taking the overall win.

We wish Nayama a speedy recovery!

NETBALL: U14 vs The Mount

The team started well, keeping The Mount on their toes and turning the ball over on many an occasion. As the game progressed, play became more erratic and mistakes were made in panic.

The last quarter, QM were back on track, focussed and on form. Unfortunately, it was a little late to change the final score.

Team of the week: 3rd Netball

SWIMMING: Seniors vs The Mount