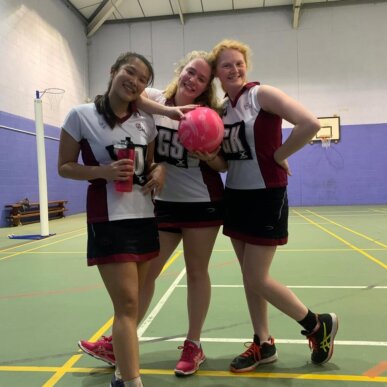 This week: netball fixtures all round with Mavericks B vs Sherburn Flyers, Mavericks A vs RI Eclipse, plus Seniors and U15s vs The Mount.

Also this week, a half term riding update from Megan (LVI), plus fantastic lacrosse news from Elsa (Year IV).

I have had a fabulous, equestrian-filled half term ranging from family hacks out, to competing at BE Arena Eventing Championships.

My half term began with a trip down to Aston Le Walls where Harry and I competed in the 100cm British Eventing Arena Eventing Championships. With one unlucky pole in the Showjumping and an amazing round of the Cross Country, we were placed 5th and awarded some fabulous prizes!

On Thursday, we travelled to Bishop Burton College and competed in the British Dressage Regionals, in the Prelim Silver section. After warming up really well, and despite my giddy horse calling to his friends, we did a really good test and were awarded 67.64% which placed us 3rd. I was also awarded as the highest-scoring under-25 rider.

I have had a fabulous half term which has been perfect for preparing us for our first eventing competition in a few weeks' time.

Huge congratulations to Elsa who has been selected to join the U19 Scotland Lacrosse Squad.

Elsa will attend several training sessions, during which the selection for the A & B teams for the Home International Lacrosse Championships will happen.

We look forward to sharing more news of Elsa success and details of the Home international Lacrosse Championships.

NETBALL: Mavericks B vs Sherburn Flyers

Player of the Match: Bonnie (LVI)

Mavs B were raring to go after the half term break and ready to take on Sherburn.

They passed well but it all broke down in the last passes towards goal, reducing our chances. Kitty (LVI) put away any shots on goal we had, which kept the team in the game, but unfortunately it wasn't enough to secure a win this time.

Two chances left for the notorious B's to get a win this season. Stay tuned to find out if this miracle could happen!

Still without many key players due to mocks, Mavs A put in a big effort in the second-to-last game of the season.

They worked hard against a strong team from RI with some frustration coming out on the pitch. This only spurred the team on, as they were neck and neck with the opposition the entire game, just giving way to a few extra goals towards the end.

Unlucky this time Mavs A!

NETBALL: Seniors vs The Mount

Player of the Match: Kitty (LVI)

The LVI represented the school in another netball fixture this week. The girls had great fun, trying positions they don't normally play and giving it a go with some wonder-goals from Ella (LVI), Nayama (LVI), Zoe (LVI) and Kitty (LVI).

The girls worked hard in the second half to pull it back and only lost by a few goals in the end.

Well played by all!

NETBALL: U15 vs The Mount

After a while not playing together, it was great to see the U15s back on the court.

They started out strong and led the game against The Mount the whole way. Every player linked well on the court and there was some excellent interceptions from the defence.

Player of the Match Elsa created great space on the couty and made some excellent shots.

Stars of the week: Bonnie (UVI)

Team of the week: Mavericks A

SWIMMING: Seniors vs The Mount