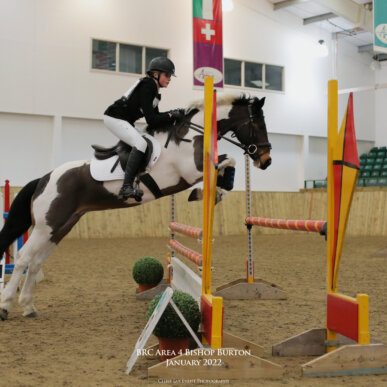 Their course was disrupted last year due to lockdown, but the girls have shown fantastic commitment and hard work throughout the course.

Find out more about the National Pool Lifeguard Qualification at QM.

Congratulations to Freya for qualifying in two eventing competitions at the end of 2021, and a show jumping championship in 2022!

Before Christmas, Abbie and I competed in the Bates Saddles British Eventing Arena Championships in the 90cm class. We got a double clear round, but were just 1 second away from the fastest rider and came in 5th place.

With that, we have qualified for the National British Eventing Bates Championship at Aston le Walls Eventing Centre in a couple of week's time. Looking forward to that as we stay away with Abbie at a nearby livery yard for the weekend.

We also competed at Port Royal Equestrian Centre over Christmas period in the Pony Club Spring Festival Arena Eventing Competition in the 1 metre class. We won this and qualified for the championships.

It's going to be a busy start to our Eventing Season!

On Saturday, I competed for my local riding club Ebor Vale in my first event of 2022 on Abbie. We were competing in the 90 cm Show Jumping class.

We didn’t know if the event would still take place as it was gale force winds, but luckily the winds dropped and we were able to travel. The event was held at Bishop Burton where, thankfully, they have indoor arenas.

There were two rounds in the competition and i didn’t get the opportunity to course walk for both, so i had to just watch a couple of rounds and remember them. It was wild and windy while we were warming up, but it takes a lot to rattle Abbie.

We went clear on the first round, but then in the second we got an unlucky pole and four faults. We didn’t think we had been placed because of this, but then found out we were lying in first place until the last rider pipped us to pole position.

We were delighted to finish in 2nd, and it also means we have qualified for the Championships later in March.

Hi. My name is Sophia and I have been skiing since I was five, so as you can imagine, the winter olympics is very exciting to me.

This year is especially exciting as, like most people across the world, I have not been able to go skiing for a good two years now because of Covid.

This year, the Winter Olympics will be held in Beijing, starting today - Friday 4th February - and ending on the 20th. The Winter Olympics is a time where countries across the globe come and take part in a number of events.

All of these events take an immense of concentration, each being individual and just as complex as the other. I think it is really great watching them, especially your favourites.

My personal favorites are the freestyles in skiing and snowboarding because you can really see different styles shining through. I really hope that this year lots of people try and watch the games to get inspiration for whenever you go skiing next.

I hope you have enjoyed reading this.

A trip to the seaside for our 2nd team this week saw a close fought match between both side. Georgina (V) worked hard at bringing the ball down the court and Luisa (LVI) and Megan (LVI) worked hard toegther in defence. With possession practically equal from both teams it was down to the coversion of goals which saw Scarborough take the lead winning 20-11. Well done to player of the match Georgina (V)

Following on from the 2nds game 3rds were keen to win, with the scores level at quarter time QM pushed hard in the second quarter to go up 4-2. Player of the match Poppy Craven worked hard at goal attack to feed the circle. Scarborough worked exceptionally hard in the third quarter bringing the scores level by the final whistle. with the game ending on a 5-5 draw.

NETBALL: Mavericks B vs Haxby 6

Great first quarter from the Mavericks B this week, linking well on the court and showing some great movement. Haxby 6 came in strong from the second quarter, taking the overall lead.

Staff are so impressed with Mavericks B's tireless workrate week in, week out - regardless of the score never letting their heads go down. Keep it up girls!

Team of the week: 2nds Netball

U12 Netball vs Queen Mary's

U16 VII Netball vs Queen Mary's

U14 VII Netball vs Queen Mary's