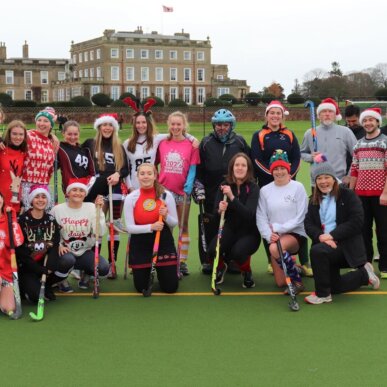 Read the latest sporting results from Queen Margaret's. This week we also had our annual staff vs students hockey match!

Last Saturday we had a number of fixtures vs Tranby School, both at home and away.

The girls played really well in all four matches and most of the teams were very well matched. It was lovely to see the majority of Red House who were available play in these matches, and for many there were a number of debutants.

The two close matches were the U15 match away, where some Year III girls played for the year above which was a great experience for them. Elsa Scott (year IV) POM.

The home teams were greeted by many home supporters which culminated in a lovely atmosphere here at QM. A big thank you for those who came to watch; it is lovely to have such gracious and complementary support on the sidelines. I am sure the cheers could have been heard far away.

HOCKEY: U15 vs Tranby

The girls played well at the weekend with horrendous weather conditions. They fought hard and had many chances against Tranby with some fantastic shots from Elsa. Unfortunately, Tranby's keeper was on it and made some fantastic saves. There was some great linking throughout the pitch and good support of each other. This allowed for a lovely ball through from Harriet Wilson in defense straight to Elsa as centre forward, allowing her then to take it into the circle and slip it into the corner of the goal. Tranby managed two well worked goals back against QM however, leaving the final score as 2-1. Well played girls.

The U13 A team started with a bang, scoring three goals early on in the first half. With some stunning play and a great passing game... teamwork is the dream work! With it all square in the last few minutes, QM came back to score the winning goals. It was lovely to see Freya (Year II) and Evie (Year I) play well. As stated, the team played so well together and the opposition gave Francesca (year II) POM.

Our U13B team again showed promise and an improvement, with many girls playing exceptionally well. Blanca and Miriam (Year II) did incredibly well in the team. A mixture of Year I and II girls then played in the next round of matches with many girls playing for the first time. Congratulations to Izzy (Year II) captaining the team in great style and composure. Well done to Martina and Miriam (Year II) who also played well and Sadie (Year I) scoring a goal after Faith (Year I) gave her the winning pass.

Player of the match: Miss Hagan

Mavericks B got to play inside this week in a fast paced game. The girls worked hard on court and started out strong. Northern Devils had the upper hand with their height, ultimately taking the win. The girls have learned lots from Mavericks this term, and look forward to more games after Christmas.

The atmosphere was lovely. The girls team amalgamated at the front of school, donned in their red capes with Christmas music and singing as they came out to the pitch. They were all dressed up in Christmas attire and how lovely it was to see them smiling and enjoying themselves... what a year group they are - brilliant!

The girls seemed at times to be playing football instead of hockey... I honestly thought our super Upper Sixth Formers (with the help of Kitty (LVI) in goal) were going to put a big score on us, but the bravery, resilience, and unconventional hockey played by Mr Aston took the girls by surprise.

Mrs K was outstanding in goal, and Mrs R was everywhere, saving goals and supplying the passess to her frontline. For me, Mr F was a shining light and definitely has a bright future on the hockey pitch. Ms H scored a lovely goal and then injured one of the stars... poor Caragh.

A big thank you to all who took part and it was great to see so many of the Upper Sixth supporters and all the other girls who came out to support us all. Thank you all and a Merry Christmas everyone.

Team of the week: 1st Hockey