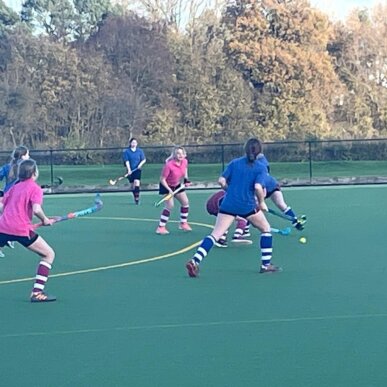 NETBALL: Mavericks B vs Sherburn

An incredibly cold night for Mavericks B in what was a difficult match against Sherburn. They fought hard ,but sadly couldn't convert to goal, giving Sherburn a convincing win.

After nearly 5 weeks off sport, the Firsts were back to take on their rivals, St Peter's. The girls arrived in good spirits and put the pressure on straight away. They had lots of fight and this showed in their determination when going towards goal. There were some great balls through from the midfield with Flo, and our backs with Kitty and Eva, allowing our forwards to attack St Peter's circle over and over again, as Daphne pushed their defence back. Unfortunately, a late goal was snuck in, leaving the score1-0 down at half time.

Not long after the start of second half, Daphne got hit, resulting in a penalty stroke. Lucy took this shot really well, but St Peter's got a great save on it. A tactical change in the second half placed Flo as Centre Forward. After a lovely cross in from Grace, Flo then managed to put one in the back of the net, leaving the final score as 1-1. A fantastic match from all players which left all supporters very impressed. Well done.

The 2nd XI were nervous to start, and with a lack of players, they needed some 1st XI to step in and help them out. This helped settle the team, but St Peter's got several early goals which caused the girls to panic slightly. This meant our structure was lost slightly, and it caused a bit of confusion from the girls.

In the second half they settled and pushed St Peter's back, allowing for more chances. Unfortunately, St Peter's overpowered our defence and scored some fantastic goals. The girls should keep their chins up and look forward to the next fixture.

QM Swim Team keeps its unbeaten record! Our second swim match v Bootham again gave us a win overall. Bootham were not able to field a senior team, which was a shame as our seniors are exceptionally strong, but it was great to see Olivia and Nayama (LVI) helping the younger girls on poolside. The U13 team had a fantastic swim and many had to swim for the U15 as we had a few last-minute drop outs, demonstrating the strength in Year II.

Team of the week: Swimming

U15 Hockey vs Tranby

U12 Hockey vs Tranby

U14 Hockey vs Tranby