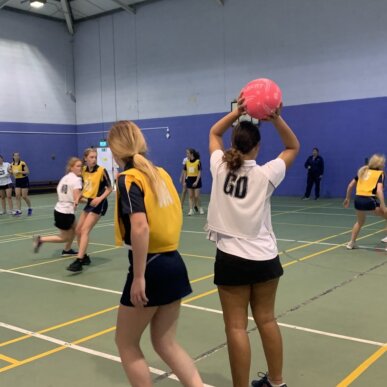 As we come to a close on Friday for a well-deserved two-week break, I would like to take this opportunity to thank all the girls for making it an exciting and enthusiastic seven weeks.

Getting back to competitive play and the enjoyment of representing QM has been the highlight of this half-term. Thank you to all the parents who continue to support us on the sideline and a big thank you to my wonderful staff.

Don't miss a fabulous opportunity to watch some live world-class Netball over half term. The Fast5 Netball All-Stars Championship is an all-action afternoon of non-stop, pulsating netball.

Further congratulations to Francesca (Year II), who has been invited to trial for North East Hockey - wishing you all the luck for your trials.

Francesca also made her debut for the 1st XI Hockey - following in the footsteps of Florence (Year V) on the England Hockey pathway!

Elsa has not only got into the hockey, but also plays for Scotland U19 Lacrosse!

In Netball, congratulations to Poppy (Year II) for getting into North Yorkshire Netball.

The odds were against us with injuries and illnesses plaguing our 1st XI this week, but the girls really held their own with Nayama (Year LVI) and Jemima (Year LVI) stepping up to help the team out. Our defence played excellently, with Kitty (Year LVI) making some fantastic saves and helping us hold the scoreline at 0-0 after half-time, with some unlucky misses from our forwards.

In the second half, the lack of subs meant the girls were on the back foot and exhausted after fighting off Pocklington. This meant that the opposition managed to sneak three goals towards the end of the match, despite fantastic efforts to keep them out including excellent short corner defensive work.

The 2nds took on Pocklington this week in a well-fought game. However, Pocklington had the upper hand, managing to convert more goals on the day and taking the win at 5-1.

Georgina (Year V) was quick-footed, managing to find space, and she showed creativity with her passing - earning her Player of the Match. Coach’s Player was awarded to Megan (Year LVI) for her outstanding defence and distribution of the ball up the pitch.

U15 Hockey vs Pocklington

For some of the U15s, this was their second match against Pocklington this season. Again, with no subs for the team, the pressure was on. Despite this, the girls came out fighting and applied pressure straight away, with fantastic spatial awareness on the pitch and very well-kept structure throughout the positions.

Some lovely transfer work and extra fight from Rebecca (Year III) and Elsa meant that possession was maintained for a lot of the play, meaning Georgia (Year IV) was able to secure two incredible goals. This gave the girls a lot of confidence, and the great movement and passing by Sophie (Year IV) allowed this team to shine on Saturday.

U14 Hockey vs Pocklington

What a game! Our visitors Pocklington took the lead in the first two quarters, taking their opportunity to score three goals during this time. QM were unlucky not to put the ball into the opposition’s goal.

A change of tactics and positions at half-time saw a complete turnaround. QM got right back into the game and scored four excellent goals, with a number of cheers from our spectators. The final result was a 4-3 win of an excellent game. Celia (Year II) was awarded Player of the Match by our opposition. Thank you to all the parents, grandparents, and supporters; it created an excellent atmosphere on the side of the pitch.

The U13 B team started out strong this week. On the pitch, it was evident that they had taken on-board advice from lessons, and shown improvement with many players attending extra club sessions. Scoring goals in the second and fourth quarter, they won 2-0. Player of the Match was awarded to Blanca (Year II) for her excellent movement on the pitch, helping in both attack and defence.

Mavericks B vs Selby

Mavericks B took to the court this week against Selby. It was a slow start from both teams, but they soon found pace. Megan worked tirelessly in defence, making some great interceptions and earning her the Player of the Match title. The team have once again improved from the previous game’s score, showing determination and teamwork on court.

Mavericks A vs RI Breeze

Starting out strong this week, Mavericks A went into the lead at quarter-time. RI Breeze soon came back in the second quarter, bringing the game to a draw at half-time. Nayama made some superb interceptions, getting valuable turnover balls, however RI Breeze had an outstanding third quarter, taking the win at 54-42.

U15 Netball vs Wolfreton

The U15 netball team was hampered with illness this week, but that didn't stop them coming out strong in the first half, taking the lead to 14-10 by half-time. Player of the Match Olivia (Year IV) made some superb passes into the D for our shooters to score. Unfortunately, Wolfreton came back strong in the second half, knocking QM's confidence and taking the win at 22-19.

The team was in good spirits going into this next round of the Plate. With almost everyone back from illnesses and injuries, they felt confident in beginning the match. This was evident by the immediate pressure put on RGS, causing them to crack and give away an early penalty flick to QM, which was put away by Lucy (Year UVI) and gave us a nice lead.

Our lead was maintained until midway through the second half, when RGS managed to sneak two goals back. After this, the girls’ confidence slid slightly, but their perseverance carried on with a fantastic finish to the match, despite conceding a final goal to leave the score 3-1. Commendation must be given to Francesca (Year II), who stepped up and played very well in Left Wing, and Lucy (Year UVI), who played an absolute blinder and cleared up everything in our defensive circle.

Team of the week: U15 Hockey