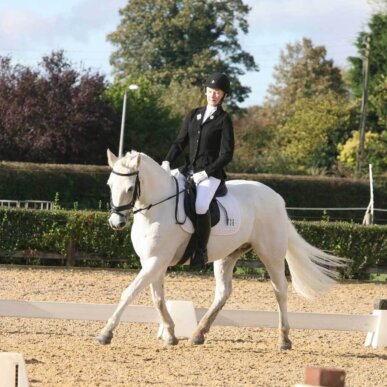 Read about the latest sports results and news, including the October half term holiday.

"It is great to hear that lots of girls have been taking part in sports over half term. Sport plays a big role whilst girls are in school, so it is lovely to hear of so many girls continuing to choose to participate in sport outside of what is offered at QM.

Well done to Evie (UVI) who cycled 29km from Mulranny to Westport whilst in Ireland, taking around 3 hours to complete.

Well done to Severine (Year IV) who did a 6km walk, and also a mention to Maya (who joined us at the start of the year and is new to hockey) for continuing to show your enthusiasm for sport by participating in tennis and hockey outside school.

Also, well done to Pau (who joined year V in September) - for trying yoga and taking ballet classes over half term.

During the half term, I went to a sports resort called Club La Santa in Lanzarote to do lots of classes such as HIIT, Step, Ultimate Abs, Body Balance, Crossfit and Body Attack-Silent Fit. I was also able to use top-quality training facilities such as the two Olympic Pools, Tennis courts and lots more, where many athletes go to train.

While I was there she completed a sprint aquathlon, coming 6th lady, and also participated in a Stand Up Paddle Race, which Zoe (year V) completed a lot faster."

"Riding for the Disabled Association (RDA) is a completely volunteer-run association that helps all disabled and children with learning disabilities. I have always thought that it was a great idea, but I didn't fully see how much it helps the children until I went and volunteered. Some lessons are just for therapy and others give them something to think about and learn to ride."

During the half term holiday, Eve (Year IV) competed in the first round qualifiers for the 2022 Spring Festival Dressage. She qualified for the next round, which will be the area competitions in March. Well done Eve!

The girls played fantastically for their first match back after half term. With a cold night and rather slippy court, the girls played cautiously but were able to link passes well, despite the difficulties. Overall, with a slightly younger team, they proved themselves and worked really hard to keep possession and play well.

NETBALL: Mavericks A vs Haxby 4

Another cold match for Mavericks A this week against Haxby 4. Slippy conditions called for more cautious play, but Mavericks took the lead in the first quarter. Haxby came back fighting in the third quarter, gaining a healthy lead before taking the win 46-31.

SWIMMING: vs The Mount

WOW - it was great to be back in the swimming pool for our first competitive match since March 2019. The noise level and enthusiasm from both swimmers and spectators was fantastic.

Many girls had their first swims as part of the team. Special mentions must go to Poppy (Year V) for stepping in to swim extra races at the last minute, Amanda (Year III) for her superb swims, and all of the senior team for showing such depth and talent. Thank you to all those who helped and cheered.

BADMINTON: vs The Mount

Our first badminton match since the pandemic was a positive, well done to all the girls who played in the match! We had played both singles and doubles. Most improved player Angel (LVI).

With no subs for this fixture, the pressure was on the B team this week. The girls were upbeat going into the game. They started strong, with some lovely passing and brilliant defending from Luisa and Harriette. The shooters managed to get lots of chances and tried hard to put the shots away, but they were unlucky and faced a strong defence from Stamford Bridge. Fitness got the better of the girls by the third quarter, and with cracking shooting from Stamford Bridge in the last quarter meaning no shots were missed, this left us on the back foot allowing Stamford to sneak a large lead and walk away with a win.

Player of the match: Mrs Rastall

A fast-paced second game this week for Mavericks A. Coming out strong from the start, QM soon took the lead. All players worked tirelessly, yet York City Cannons still managed to pull back a few goals. However, QM's tight defence and quick attack helped them take the win 35-29.

Team of the week (W/C 15th November): Year I and II extra sport on Saturday