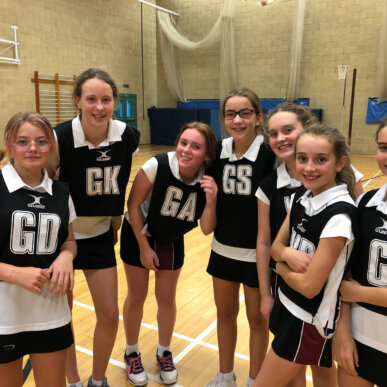 Congratulations to Mavericks A for a victory over Hemingborough Hawks this week. Elsewhere, there was also some great playing, close defeats, and many learning opportunities.

It was the U14's turn at National schools on Saturday and luckily the weather held a lot better than Tuesday! With a tough team to start off the tournament, the girls didn't let their heads go down, managing to win and draw a game. After each game the girls came away with improvements for the next, which they worked hard to bring onto court. Some lovely play between Maisie (Year III) and Poppy (Year II) saw them named players of the tournament.

On Saturday, girls from Year IV to UVI played in the North Schools Lacrosse tournament. With this being the first time we have played since March 2020, and being our first time playing together as a new team, the girls gave an outstanding performance throughout the tournament.

The day started off with five consecutive matches which left us very tired. However, after a quick lunch and some sweets from the girls’ parents, we were raring to go again. After the break we only had three matches to go and every girl on the team wanted to win. We kept our positive mindset and momentum going and won all of the last three matches consecutively, with magnificent saves by Megan (Year LVI) and excellent goals from Elsa (Year IV) and Olivia (Year IV)! All of the girls showed their great strength and resilience throughout the long day, despite the challenging conditions of playing against girls who compete at both a national and international level. Overall the girls should be very proud of their performance as they showed their determination and positivity, both on and off the pitch.

NETBALL: U13 vs Bootham School

Kicking off this week's fixtures, U13 Netballers worked tirelessly on court against Bootham. The whole game was closely matched with some superb interceptions from Celia (Year II) and Francesca (Year II) in defence, plus great circle work from Poppy (Year II) and Blanca (Year II) in attack. The last quarter was nail biting as the girls took it to a 14-14 draw with just seconds left on the clock - taking the game to Golden Goal. Unfortunately, we lost possession which was capitalised on by the opposition who went on to win the game. The QM girls should be very proud of their performance and take this into their next plate game!

NETBALL: Mavericks B vs Haxby 6

A cold start to this week's Mavericks B game, but the girls soon warmed up. With an attack-heavy team, some girls found themselves out of position, but this didn't stop them. The girls brought a great energy to the game and weren't afraid to try out any position. Player of the match Harriette (Year V) worked exceptionally hard as goal keeper, making some superb interceptions. Achieving more goals than last week, the girls came away in good spirits.

HOCKEY: U14 County Round National Schools

The U14s settled in quickly after a changed order of play. They worked really hard in defense against Ripon to field off any goal attempts until near the end of the first match.

After a quick break they came back to play their second match against Ampleforth, who they had already faced earlier in the year. Even though this was the girls' best match performance-wise, Ampleforth got several well-placed goals. The girls worked well in this match and linked some lovely passes together, but were just unfortunate in some 1v1s with the keeper.

In the last match against Giggleswick they were feeling tired after the past matches, but continued to power on in QM style and managed to hold the opposition off for a 1-0 loss.

NETBALL: Mavericks A vs Hemingborough Hawks

Mavericks A took on Hemingborough Hawks this week in an energetic game from start to finish. A strong start saw them take the lead and they didn't stop there - winning every quarter. Rose (Year UVI) linked well in defence, earning herself the Coach's Player Of The Match title. The team look forward to their next match after a 50-32 win this week, well played all!

Our U18s took on GSAL in the next round of the Plate. With several squad members ill or injured, leaving us with no subs, the girls fought their hardest to keep GSAL out.

Praise must go to our defensive line of Flo (Year V), Bonnie (Year LVI), Eva (Year UVI) and Jen (Year V)with help from Nayama (Year LVI). They all worked tirelessly to turn over possession and worked well as a team to leave the score at half-time as 1-0 down.

After an injury with Flo and continued pressure in the game, GSAL managed to gain a significant lead, putting the girls under pressure and causing them to slip up in certain areas which lead to an overall loss of 7-0. Lots to improve on from the girls, but a great performance yet again.

HOCKEY: U13 Girls In2 Hockey Tournament Preliminary Round