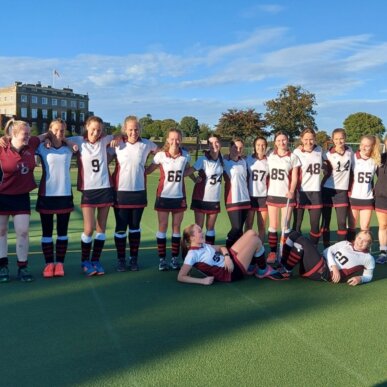 Welcome to this week's Sports Review. The rain got the better of us on Tuesday, leaving the U16 National Schools Netball to be continued at a later date. The weather quickly picked up the following day though, so we've seen a healthy mix of hockey and netball fixtures, while tomorrow (Saturday 9th October) will be the North Schools Lacrosse Tournament.

NETBALL: U16 National Schools 1st Round

In the first match of the Round Robin tournament this week, the girls started out strong but struggled to convert to goal. Taking advantage of this, Ashville were able to win the match 2-0. Players of the match were Bonnie (Year LVI), Lucy (Year UVI) and Flo (Year V).

After warming up in the first game it was QM's turn for a win against Ashville with a great assist from Grace to Ava scoring an excellent goal. Ellie put in a Player Of The Match performance. Well done to Hattie Warne for her debut on the first team. The improvement in the team is noticeable - there was a lovely atmosphere with a smashing group of girls in year V, LVI and UVI. Well done to our captains team of Ava, Lucy and Connie.

Player of the match: Miss Hagan and Luisa (Year LVI)

Playing for the first time all together and for many the first club league, game the Mavericks B team took to the court against Rawcliffe. The girls worked hard and didn't let their heads go down, cheering for every goal and encouraging each other along. Miss Hagan was awarded Opposition's Player Of The Match and Luisa Heckmann the Umpire's Player Of The Match, working tirelessly on court! The girls now look forward to the next match on Monday night.

HOCKEY: U16 National schools Round 2 vs St Peters

Our years IV and V played against a very strong St Peter's team. Well done to all - Miss Hagan and I were very impressed with your attitude and sportsmanship, as well as your caring nature for Kitty, who unfortunately got badly knocked by her opposition. What a lovely group of girls you are. Anne Davies

NETBALL: Mavericks A vs. Haxby 3

Thursday night was Mavericks A's turn to take to the court with lots of positive play on court against Haxby 3. Working against tall defence, the team had to adapt play and movement on court, but some great play from Jennifer earnt her Opposition's Player Of The Match. At the other end of the court, Nayama worked tirelessly in defence to earn her the Umpire's Player Of The Match. Special mention to Sofia for stepping up at the last minute and putting in a great performance on the court. Mavericks A lost 21-40, but as they got within half score they come away with a point.

Team of the week: U14 Hockey

NETBALL: 1st Round National Schools, U14

NETBALL: Mavericks B vs. Haxby 6

HOCKEY: County Round National Schools, U14 T1 and T2

NETBALL: Mavericks A vs Hemingbrough Hawks