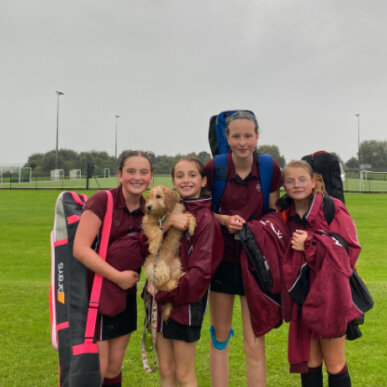 But first, a message from Director of Sport Anne Davies.

"It has been so nice to get the girls back to school on the sporting fields and courts. I have been immensely proud of how the girls have dealt with this after such a long time off competitive sport.

It's wonderful to see so many smiley faces coming together as strong teams as we start to see some form of normality. Thanks to those of you who have supported your daughters so far this year, it has been lovely to talk to you again on the sideline and I hope to meet more of you as the term progresses.

For your information, the PE department has a number of clubs at lunchtime and after school, so please encourage your daughters to attend extra training in order to improve on our performances. Please may I remind you that all the girls need a swimming costume as we enter cold and wet days at Escrick in order to utilize the swimming pool.

After Leave Out, sport continues to play a major part as we host the North School Senior Tournament, as well as a number of national competitions - all of our fixtures are now in full flow. As the weather is turning colder and wetter, there is the opportunity to purchase a sub jacket off the school Blazer site for all girls."

With the girls' heads full of things to improve on and try out from the week before, they came out determined on Saturday to face BGS.

Although a few key players were missing and injuries were rife, the girls worked well as a team to communicate and try to keep possession as much as possible. Great communication from the midfielders through to our forwards helped us attack BGS several times, but with no shots getting past their keeper, it was a tough match.

BGS worked hard to secure 4 goals - mainly in the second half as QM found fitness to be getting the better of us, but there was a vast improvement in the overall game compared to a few weeks ago. Spirits are high as we look forward to the next match.

U16 Hockey vs Bradford Grammar

The U16 squad was very strong this week. A vast improvement was seen from the Saturday before with some strong passing and plays being introduced and used throughout the match.

The girls defended tirelessly and had ample opportunities on goal, but the BGS defense proved too tough to break. BGS executed several short corners and some lovely goals from open play, meaning QM conceded 3 in the first half.

After a positive half-time talk, the girls came back fighting and tried hard to improve their press, marking and communication, but again BGS were a tough opponent and managed to sneak 2 more goals in leaving the final score at 5-0.

U15 Hockey vs Bradford Grammar

After watching the two senior teams play before them, the U15s started play feeling quite nervous, with not a lot of confidence. After the first quarter, the girls picked up the pace and managed to link some nice passes together, getting several nice counter attacks on Bradford Grammar - unfortunately just unable to find that final strike into the goal.

With loads of support from the goalkeeper Pippa (Year IV) and our strong defensive line, the girls put in a performance they should be proud of, with a great improvement on their previous fixture. Unfortunately, some very well executed goals from BGS and an inability to take the ball around the keeper from QM, left the final score at 4-0 to BGS.

U14 Hockey vs Bradford Grammar

U14 played much better this week, listening to some tactical advice & learning to move the ball with more haste. There are still areas for development, but as a team they were encouraging and focused. Maisie & Tabby are most improved.

U13 started off strong but struggled to convert, going 1-0 down at quarter-time. After a half-time team talk, play began to change with QM getting into some great spaces and beginning to talk to each other.

Player of the match Francesca (Year II) worked tirelessly, both in attack and defense - linking well with coach's player of the match Celia (year II) and the rest of the attack to score some well-earned goals for QM. At the final whistle, the score ended on a 4-4 draw: a great comeback from the QM girls.

U14 National Schools Hockey 1st Round

On a windswept afternoon with torrential rain, our U14 team played in the first round of the National School Hockey Tournament. In the first game they came up against a strong and tall St Peter's team. Then, the final match against Fulford school saw the team start to play well together and get into a rhythm to ensure QM secured second place.

Ripon Jewels travelled from Harrogate this week for a friendly fixture against the QM U19 A and B teams, and Mavericks B team. This was a great opportunity for both teams to practise ready for their upcoming competitions. Jennifer (Year V) and Nayama (Year LVI) played well, earning them both players of the match.

U19 National Schools Netball 1st Round

Score: Knocked out in group stage

QM took two teams to the U19 National Schools this week, both set in different pools.

Both sides managed to get some wins and, despite the sunny conditions, some excellent shots - coming away with plenty to work on. Players of the tournament goes to Nayama (Year LVI), Kitty (Year LVI), Bonnie (Year LVI) and Emily (Year UVI).

"On Wednesday last week, QM embarked on their first Netball match for what seems like forever! We took two strong teams with Miss Taylor, Julie, Miss Bale and Mrs Rastall. We played against the likes of St Peter’s, The Mount, Bootham and All Saints.

Despite our strong defending and brilliant playing, the 1st team didn’t quite make the Semi Final, however this doesn’t reflect how we played. The games were close and we weren’t disheartened by the results.

The 2nds progressed hugely and ended on a high by winning their last match. Similarly they didn’t win their pool but played extremely well. Players of the match were awarded to Emily and Kitty , with special mention to Olympia and Sofia who sadly ended up injured! It was a great afternoon overall and a strong opportunity for the seniors to play together properly! We’re looking forward to our next match."

On Wednesday afternoon, the girls who are in badminton team played a tournament with different partners. Eunice (Year V) and Athena (Year LVI) played extremely well in the tournament, with the defending and smashes going on the court. We had a fun sports session in the afternoon.

On Wednesday afternoon, in our Senior Sport session a group of girls took part in some skills practice and games for rugby and football. We first practiced some football skills and passing followed by a very competitive match. The end score was 2-2 and the player of the match was Harriette (Year V).

A big thank you to Miss Davies and the sports department for setting up the game and for introducing football and rugby as part of our sports sessions.

Team of the week: U16 Hockey

Freya (Year III) enjoyed success at Epworth on Sunday 26th September where she won her class in the 80cm One Day Event!

"We had a brilliant end to our first ‘mini’ season at Epworth on Sunday. We won at the same place where, just less than 4 months ago, we started off at our very first ‘have a go day’ for one-day eventing.

Leading from the off in our Dressage with 28.3, followed by a clear round in the Show Jumping and Cross Country - picking up 0.4 time faults for being too quick.

We had the second best finishing score of the day out of all classes and competitors. We have put in so much effort together, without taking it too seriously and having lots of fun along the way. I never thought we’d end up doing this when I started riding Abbie over lockdown. It's so much fun and I'm looking forward to my next event!"

Netball: 1st Round Schools U16 Netball

Hockey: U18 T4 - 1st round / County Round National Schools

Netball U14 1st Round National Schools